Bochum: The new tramway to O-Werk 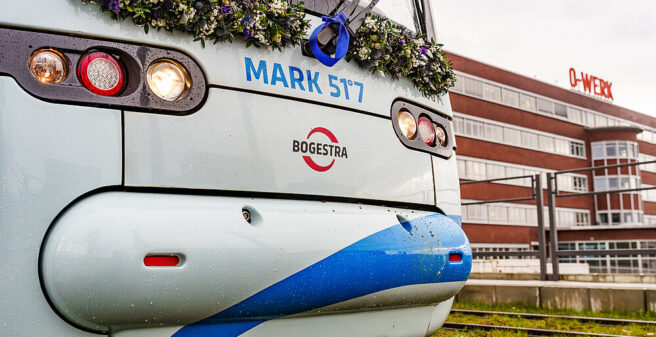 The new year starts with celebrations for the Bochum-Gelsenkirchener Straßenbahnen AG (BoGeStra): After 15 months of construction, the approximately 800m long line to the MARK 51°7 urban development area on the former Opel site in the east of the city started revenue service on 9 January 2023. In the next few years, a so-called „innovation quarter“ will be built here on an area of about 70 hectares. In addition to the 3,000 jobs already located here, another 10,000 jobs in a wide variety of industries are to be added in the future.

The new tram connection gives public transport access to the area. The new section branches off from the existing line to Witten behind Bochum-Laer and termintes at O-Werk, running double-track throughout mainly on grass track. One intermediate stop at Max-Planck-Institut is served on its way. Line 302 from Gelsenkirchen-Buer now operates every 15 minutes on weekdays. From Gelsenkirchen main station via Bochum’s city center to Laer Mitte stop, there is also a tram every 15 minutes operating as line 302 to Langendreer S-Bahn station, resulting in a 7.5-minute interval on the shared section of the route.

In addition, Bogestra announced that all 95 metre-gauge Stadler Variobahn trams had been delivered and put into service by the end of December. They replaced all older Düwag M6S/C and MGT6D in service by 2021.