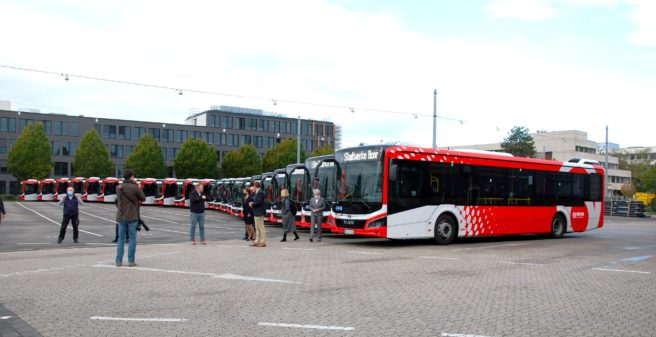 2020 brings a considerable change in the bus fleet of SWB Stadtwerke Bonn, Bonn’s urban transport company: Just one older bus will remain, no. 9902, a Mercedes-Benz O 405 N from 1999, which was retrofitted several years ago and therefore remained in the fleet. A number of younger buses including several older Mercedes Citaro and articulated buses from MAN are to be sold SWB, via a web-based bidding process. Bus 9902 will be sold separately.

On 7 October 2020, SWB presented the new buses at its Friesdorf depot.

The new MAN are so-called “mild hybrids”, not full hybrids. This means that the diesel engine always works while the bus is running and is “only” supported by the electric drive. Unlike a full hybrid, the car never drives 100% purely electric. You can see this when you are travelling with the “Mild Hybrid”: you always hear the diesel engine (unless it is switched off thanks to the automatic start-stop.

The electric motor is installed in the powertrain between the diesel engine and the transmission. Recuperation equipment is included: When braking, electricity is generated and stored in ultracaps on the roof.

SWB Managing Director Anja Wenmakers: “Withthese new mild hybrid buses, we will only achieve the goal of Stadt Bonn to become climate neutral by.” Even more, by 2030 SWB wants to have completely converted its bus fleet to electric buses.

In addition, SWB received another 4 MAN Lion’s City, but of the previous generation and as EUR VI diesel, to operate on the airport line, numbered 2001-2004.