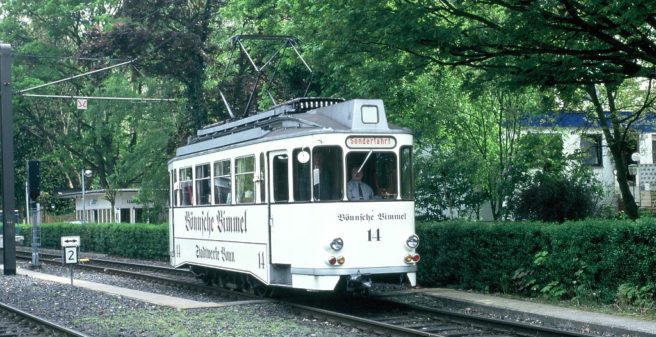 No. 14 in Bad Honnef on a special birthday charter | © Christian Marquordt

On 22 May 1892, the steam tramway Bonn – Godesberg inaugurated revenue service starting at today’s Bundeskanzlerplatz in Bonn (at that time simply the crossing Koblenzer Straße / Reuterstraße). It ran on metre gauge, and belonged to the “transport concern” Havestadt, Contag & Cie, which also operated the Bonn horse-drawn tramway. (At that time, Godesberg was simply a neighbouring municipality to the south of Bonn; Godesberg had to wait another 37 years for the title of “Bad”, and a total of 43 years for its elevation to the status of a city).

One year later, in May 1893, the steam tramway was extended to Mehlem, south of Godesberg. At that time, Mehlem was also still an independent municipality, and even more, the main town of the “Bürgermeisterei Mehlem”. On 23 October 1893, the interurban tram was extended within Bonn city limit from “Bundeskanzlerplatz” via Kaiserstraße to the level crossing “Königstraße” (then called “Grüner Weg”).

In October 1904, the tram became municipal property. Havestadt, Contag & Cie received a total of 3,100,000 Reichsmark for the Bonn – Godesberg – Mehlem tramway (BGM) and the Bonn (horse) tramway, which was truly a proud sum at the time. The Bonn horse-drawn tramway became 100% owned by the city of Bonn (henceforth “Bahnen der Stadt Bonn“), while the “Godesberger Bahn” now belonged 50% each to the city of Bonn and the municipality of Godesberg. As a side note: In 1904, the greater Bonn area underwent spatial reorganisation for the first time: the towns of Kessenich and Dottendorf, located between Bonn and Godesberg, became districts of Bonn, and Friesdorf, which also wanted to be part of Bonn, became a district of Godesberg. (The people of Friesdorf had to wait until 1969 until they were finally allowed to be Bonners, too).

In 1911, the Godesberg railway was electrified in three stages and converted to standard gauge (1,435 mm). The final stop in the centre of Bonn was moved from the “Grüner Weg” level crossing to the corner of Kaiserplatz and Kaiserstrasse. In 1925, the line was finally extended via Bonn’s main railway station to Bonn’s Rheinuferbahnhof, where it was connected to the “Rheinuferbahn” and the “Vorgebirgsbahn” of the Köln-Bonner Eisenbahnen (KBE) – today the VRS Lines 16 and 18.

The electrification and gauge change meant that the “Godesberg” tramway needed completely new rolling stock. Twelve two-axle motor cars (Nos. 1 to 12) were purchased from Herbrandt & Co in Cologne-Ehrenfeld, all but one of which were in service until around 1960. One tramcar had to be written off as a war loss, a second one was badly damaged in the war, but was restored after the war with a relatively simple and not very attractive body,

Herbrandt from Cologne also supplied (almost identical) two-axle trailers to go with these railcars. This was a special feature of the Godesberg Railway: four-axle bogie low-floor trailers (popularly christened “bathtubs”.) The “bathtubs” had a single-width sliding door in the middle of the car on each side, and above the bogies at the ends of the cars there were platforms raised by one step with something like a “round seating corner”. The “bath tubs” were very popular with Bonn’s passengers. The author also remembers that as a boy, on occasional excursions with the Godesberg Bahn, he was eager to ride in the “bathtub”.

In 1949, Bonn was elected the capital of the Federal Republic of Germany, and the transport companies in the region rightly assumed that passenger numbers would increase under these circumstances. Additional vehicles were therefore needed. For the municipal bus service, for example, they took over two Büssing/Ludewig 5,000 T that Frankfurt had ordered in the expectation that Frankfurt would become the capital of the Federal Republic.

The “Godesberger Bahn” also saw a need for additional railcars. But where to get them? The operator came up with a clever idea: It took two of the trailers from 1911, Nos. 33 and 38, and shipped them to Herbrandt’s successor Westwaggon in Cologne in autumn 1949. Westwaggon was commissioned to convert them into motor cars.

This conversion was extremely thorough. The previously two-axle chassis were transformed into steering three-axle chassis – Westwaggon was a forerunner of this technogical solution at the time. Back in Bonn, they were coupled with a brand new trailer (No. 51), also a Westwaggon three-axle car with a much larger capacity, which was almost identical to the later supplied trailers 52 to 60, but could originally only be coupled with the Nos. 13 and 14.

In 1969, in the course of the municipal reorganisation of the Bonn area, Godesberg became a Bonn city district, with the result that the 50% Godesberg shares in the Godesberger Bahn also became the property of the city of Bonn (now 100%). The “Strassenbahn Bonn – Bad Godesberg – Mehlem” (BGM) became a part of the Stadtwerke Bonn. The operating numbers of the BGM vehicles increased by 300 (thus Trailer    51 of BGM became No. 351 of SWB).

In 1987, consideration was given to scrapping the two former driving trailers 13 and 14 and current work motor cars A 31 and A 32. After all, essential components were 78 years old. No. 13 (= A 31) was handed over to the Hanover Tramway Museum (HSM). It survived there until 2005 and was then scrapped as part of a collection clean-up.

No. 14 (= A 32) had a completely different fate. Since it was still in its original condition from 1949 and therefore did not require a major reconstruction, the decision was made to turn it into a “historic party train”. It was given back all its seats, with the exception of a four-seater seating group, which was replaced by a bar with a beer dispenser.

The restored vehicle was given the nickname “Bönnsche Bimmel” – and it became very popular, numbered again „14“ as during its normal operating life.

As such, the “Bönnsche Bimmel” was on special trips on the Bonn network from 1989 to 2019. It not only came to Siegburg and Bad Honnef, but also to Cologne via Lines 16 and 18. In addition, anyone who wanted to could also get married in the “Bönnsche Bimmel”. It was, quite officially, the “rolling branch office of the registry office of the Federal City of Bonn”. Further, once a year she was assigned “foolishly majestic tasks.“ For many years, she toured the net with the Bonn Carnival Prince and Princess during the carnival season. Not without the Kölsch beer flowing in due quantity …

After all-in more than 100 years of the service the “Bönnsche Bimmel” was considered beyond economic repair. SWB says that it was no longer possible to refurbish, while various transport enthusiasts argue that the SWB simply did not want to bear the costs for a refurbishment. As so often, the “truth” may be somewhere in between: refurbishment might have been possible, but very expensive, and the main task of a public transport company is of course not the preservation of historic vehicles, but to transport people from A to B – leaving aside the issue of image cultivation. Thus, a restoration of the last heavy interurban tramcar that still exists as a torso in the HSM in Wehmingen, as they were typical for the SSB lines to Siegburg and Bad Honnef for decades, seems even more unlikely, at least for the time being.

Subsequently, on 9 October 2019, the “Bönnsche Bimmel” moved on a low-loader belonging to the heavy-load forwarding company Baumann to “Basecamp Bonn”, a kind of alternative youth hotel and conference centre here in Bonn at the Dottendorfer Straße / Ollenhauerstraße level crossing. If you want, you can stay there in an old railway sleeping car, for example. The “Bönnsche Bimmel”, for example, has the function of a small meeting room here. Hopefully it will survive for a long time.