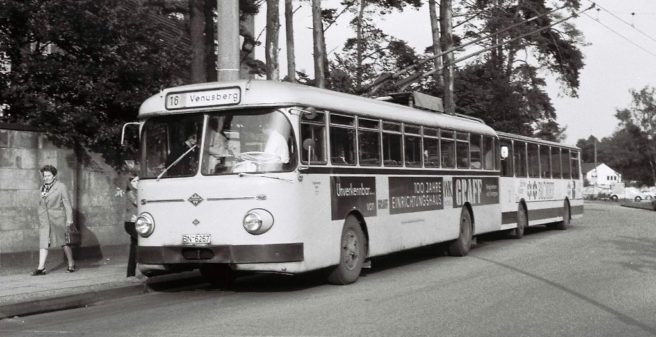 On 17 February 1951, a new mode of transport was launched in Bonn, back then the capital of the Federal Republic of Germany for almost a year and a half. Bonn’s first trolleybus line no. 15 was inaugurated on the following route: Mozartstraße – Hauptbahnhof – Markt – Koblenzer Straße (today Adenauerallee) – Siebengebirgsstraße (today Heussallee) – Bundeshaus – Drachenfelsstraße (today Kurt-Schumacher-Straße) – Gronau. At the main station was reached by a large loop: Nordunterführung – Herwarthstraße – Endenicher Straße – Mozartstraße (here the actual terminus) – Bachstraße – Nordunterführung.

Between the main station and Gronau, the new trolleybus line 15 replaced tram line 4, which had previously offered this connection with a slightly different route in the inner city.

As early as in autumn 1950, the first four MAN MKE trolleybuses (201 – 204) were delivered, followed by the identical car 205 just in time for the opening of operations.

These buses were contracted by MAN, but the body work had been subcontracted to Kässbohrer in Ulm, as the former MAN bus factory plant in Nuremberg had been completely destroyed during the war and had not yet been rebuilt.

There were historical reasons for this. BVG was founded in 1925 by ten shareholders, of which the city of Bonn was only one, albeit the largest. Originally, the BVG was supposed to take care of interurban bus routes only. The BVG was founded in order to prevent too much influence of the “Reichspost” bus routes in the Bonn region.

In 1932, the BVG became a wholly-owned subsidiary of the city of Bonn, which did not lead to an adjustment of the legal construction of the Bonn public transport system with two companies. (Source for the BVG: Stadtarchiv Bonn). Note: it was not until 01.01.1982 that the SWB handed over their interurban lines, some of which in operation since 1925, to the RVK.

The new trolleybus operation was not assigned to the bus operation, but to the tram operation “Bahnen der Stadt Bonn”. Initially, the trolleybuses were allocated at the Friesdorf depot of the “Strassenbahn Bonn – Bad Godesberg – Mehlem” (and thus to the former municipal borders outside Bonn in the still independent Godesberg). Given the problem that there was no overhead for the trolleybuses between this depot and the the line, the trollybuses had to be towed by a tractor back and forth from the Gronau terminus.

The entire line Gronau – Lengsdorf used the number plate 35 for a short period of time, which was supplemented by the existing line 15 between the main station (Mozartstraße) and Gronau. There was another turning facility from Markt (at Bischofsplatz) via Rathausgasse, Belderberg, Franziskanerstraße and Stockenstraße back to Bischofsplatz, to allow short working to and from Lengsdorf.

Line 16 was planned to go beyond Poppelsdorf to Venusberg, but in order to achieve this a completely new road had first to be built between Trierer Straße and Zeppelinstraße (today Robert-Koch-Straße). It was named “Im Wingert” and is still an important access road to the Venusberg district today. The author went to the first primary school class (Friedrich-Soennecken-Schule) in the vicinity of the construction site of this street and observed the construction progress of the new street.

On June 27, 1954, line 16 went into operation on its entire length (Hauptbahnhof – Poppelsdorf – Marienhospital – Friedrichsruh – Venusberg). At Venusberg, it did not only serve the university clinics, which had been moved from the city center to a barracks built by the Nazis after the Second World Warbut also numerous public servants, who lived in the large housing complexes, which were built up the hill by the Federal Government.

The terminus on the Venusberg was at the corner of Annaberger Weg (today Sigmund-Freud-Straße) / Kiefernweg. In the middle of the crosspoint was a small lawn, and once again the turning loop was managed by use of one single pole, which was also used as a street light, like in two other final stops as well.

At that time, traffic regulations were much more generous than today. For many years, the trolleybuses spent their break on the Venusberg by parking in the middle of the road, even with their doors open (it was possible to get in and out any time). If a car wanted to pass by, it just drove right past the bus with its open doors … totally unthinkable today. But even then, the waiting position moved after some time to the curb in the Annaberger Weg.

Until the ban of bus trailer operations on 1 July 1960, Bonn’s trolleybuses were always operated with trailers. With two exceptions: the trolleybuses 215 and 223. The two municipal transport companies had a total of 30 bus trailers – the BVG the trailers 1 to 20, the “tramways” the trailers 21 to 30. Most of them were built by the Peter Bauer body factory in Cologne-Ehrenfeld (Bauer type OA 5), only two BVG Kässbohrer trailers were bought second-hand from Recklinghausen.

The unsatisfactory situation that the trolleybuses had to be towed back and forth between the terminus Gronau and the depot Friesdorf of the “Strassenbahn Bonn – Bad Godesberg – Mehlem” for the service and the suspension of the bus stops did not last long. As late as 1952, a new depot was opened on Karlstraße on the line of line 15 between the main station and the district of Endenich, in which not only the Bonn buses, but also all diesel buses of the BVG now found their home. It was a large concrete-based hall, which could do without pillars inside. And although there were always significantly more diesel and trolleybuses at home, the hall was given the name “Obushalle Karlstraße”. It was demolished around 2000 in order to make place for a shopping center.

In 1955, a delegation from the ” Bahnen der Stadt Bonn ” visited an exhibition where MAN showed a trolleybus which was characterized by a number of technical innovations. Finally, the bus was purchased, it joined the fleet as no. 215.

In 1957, another “single piece” joined the fleet: Trolleybus 223, a Uerdingen ÜB IV s, for the first time in Bonn with components from Büssing. The well-known railway factory Uerdingen in Krefeld had designed this type, and the self-supporting integral bus body was offered both as a trolleybus and as a diesel bus. The ones in Bonn were trolleybuses, while in the neighboring city of Cologne they ran in large numbers as diesel, marketed under the model “Büssing/Uerdingen TU 10”, which is incorrect because this type designation would have meant that Uerdingen would have put a body on a chassis from Büssing. Self-supporting integral bus bodies, however, are characterized precisely by the fact that they do not have a conventional chassis, instead, they are formed as one single unit.

No. 223 was not very popular with Bonn’s passengers. The ban on trailers, which came into force on 1 July 1960, was already predictable in 1957, and so the SWB had decided not to equip it with the feature of pulling a trailer. Subsequently, overloading during peak-hours was not uncommon.

Until the mid-sixties, Bonn’s trolleybuses ran with conductors. The MAN with “Pendelschaffner”, who ran back and forth in the car and served the passengers at their place, the three-door Uerdingen (ÜH IIIS and ÜB IV s) had seated conductors at the door in the rear. In the mid-sixties, one-man operation was introduced. Trolleybuses 201 to 207 were scrapped, and only no. 208, the third from the series 206 to 208, was converted with some effort to a one-man operation and renumbered 108. In particular, the separate driver’s door on the left side of the car and the driver’s cab, which these cars had and which of course did not withstand the concept of one-man operation, were removed.

In the case of the Uerdingen, the third door in the rear was converted to passenger self-service – for this, an exemption was required at that time. The passenger opened the door by himself with a button after “clearance” by the driver, and three seconds after no one entered a step plate incorporated in the steps of the door, the door closed automatically.

Merger of BVG and “Bahnen” into SWB

On 1 January 1965, the “Bahnen der Stadt Bonn” and the “Bonner Verkehrs Gesellschaft” were merged into the “Stadtwerke Bonn – Verkehrsbetriebe” (SWB).

On 1 May 1967, trolleybus line 15 was converted to diesel bus operation. There were two reasons for this: SWB had acquired its first high-capacity one-and-a-half-decker diesel buses from Ludewig in Essen and provided higher passenger capacity, and there were also underground construction works underneath the Adenauerallee (after the death of Konrad Adenauer just renamed “Koblenzer Straße”) pending. The underground construction site repeatedly required temporary traffic rerouting, and no one at the SWB supported investments in new temporary overhead wires for line 15. Simultaneously with the changeover from line 15 to diesel buses, almost all MAN buses went to the scrap, only the two cars 113 and 114 with the Rathgeber bodies remained in place for a short period of time. For good reasons: they were always considered the two best MAN in Bonn.

Thus Bonn had only one trolleybus line: the 16. For this route five trolleybsues were actually needed, out of a total of eleven vehicles available: the two MAN 113 and 114 as well as the nine Uerdingen. At the end of 1967, the last two MAN also left. The prototype ÜB Ivs no. 123 had a tragic accident in which one person died – its fate was the scrapyard.

There were only two trolleybuses in service at all during the day, the other three being brand new Mercedes-Benz O 305 with automatic transmissions. The last two trolleybuses on line 16 were the Uerdingen 124 and 127 – and thus not only the two which were considered the best here in Bonn, but also those which moved to the Mürztaler Verkehrs-Gesellschaft in Kapfenberg, Austria, at the end of 1971 (there numbered 20 and 21, from 1978 no. 20 and 19).

When one of the drivers’s shift changed at noon on 30 June, trolleybus 124 was also replaced by a diesel bus, so no. 127 was the last trolleybus to run in Bonn. It started its final loop at around 6 p.m. at Venusberg, scheduled to take about 45 minutes. Afterwards, the vehicle was decorated just a little bit, and then it headed to its depot Karlstraße as Bonn’s very last trolleybus.

On 1 July 1971, the summer holidays began in North Rhine-Westphalia. When the schools started again after the holidays, no trolleybus were operating anymore in Bonn – SWB had started dismantling the remaining overhead line.