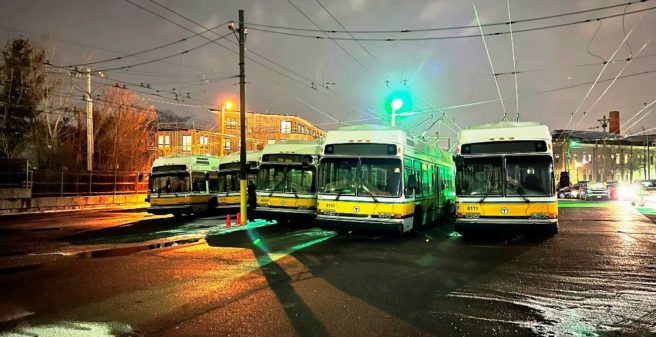 Despite considerable criticism from various sides, trolley bus service in the Boston district of Cambridge ended in the early morning of 13 March 2022: The last trolley bus, no. 4121 arrived at the depot, and only a few hours later hybrid buses took over service on both remaining lines 71 and 73. The conversion to battery buses is planned by 2024, and the depot will be converted accordingly.

The route of the so-called Silverlines SL1, 2 and 3, which are operated in trolleybus mode using 2 km of overhead line on a tunnel sectionstarting at South Station, will also be converted in the course of this year. This will mark the end of trolley bus service in Boston after 86 years of operation. The network had reached a considerable expansion in the late 1940s with up to 43 lines, but had already shrunk to four lines 71, 72, 73 and 77N by 1964. Electric service was only maintained at all at the time because these lines served a short tunnel section at Harvard Metro Station. Duo-bus service on the Silverlines began in 2004.

We had reported on the discussion about the future of Boston’s trolleybus service in a comprehensive report here (including maps):
https://www.urban-transport-magazine.com/en/uncertain-future-for-bostons-trolleybuses/

A very sad and shortsighted decision