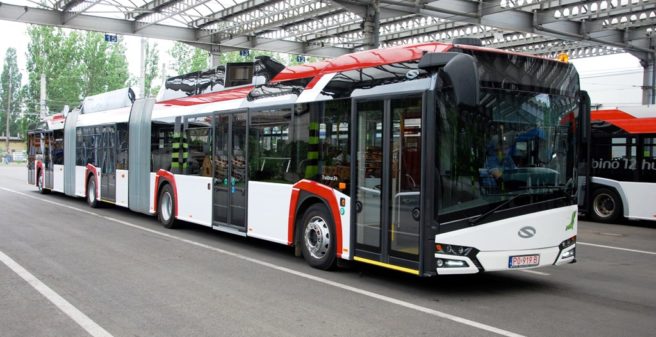 Solaris Trollino 24 bi-articulated trolleybuses will go to Bratislava by 2023. Here the prototype in Gdynia | © Christian Marquordt

The transport authority of the Slovakian capital Bratislava DPB Dopravný Podnik Bratislava had invited tenders for the procurement of 50 trolleybuses on a EU-wide level. Last winter, test vehicles were already on the streets of the city – we reported on this: https://www.urban-transport-magazine.com/en/bratislava-testing-of-new-trolleybuses-and-a-tender-for-new-tramways/.

The bid for the new trolleybuses include:

11 trolleybuses of 12 metres in length

23 articulated trolleybuses of 18 metres in length

16 double-articulated trolleybuses with a length of 24.7 metres.

All vehicles will be fitted with powerful traction batteries, which allow for longer trips off the existing overhead network. The trolleybuses will be used to reinforce the service and for use on extended or completely new trolleybus lines – about 16 km of new overhead line are to be built in the next few years, details of which can be found here: https://www.trolleymotion.eu/trolleynews/beitrag/?id=9320 . The original deadline for bids was extended from the end of May to 24 August. EU funding for the expansion of electric local transport will be used for the procurement.

Solaris will supply the 16 double-articulated trolleybuses of its „Trollino 24“ model. Unlike the test vehicle, however, it will not apply the so-called “MetroStyle” BRT bus design. For Solaris, this is the first order for its double-articulated trolleybus model and thus undoubtedly a reference project for the future. Other Eastern European transport operators are currently also considering the procurement of such vehicles.

The Solaris double-articulated trolleybus made its debut in 2019, at the Busworld fair in Brussels. It is driven by two traction motors of 160 kW each. Additional traction batteries, placed on the roof of the second section, will be recharged en route by collecting current from the overhead line. Thanks to them, the Trollino will also be able to travel without any external power supply. By pressing one single button the driver will be able to switch from the overhead line to the traction battery drive mode.

These 24.7-metre trolleybuses will provide space for 160 passengers, including 60 seated. Passenger counting sensors will be placed above the doors, arranged in a layout of 2-2-2-2-2. This innovative model will feature an array of amenities, enhancing safety and travel comfort. Operator Dopravný Podnik Bratislava has opted for standard solutions such as destination blinds, air-conditioning, Wi-Fi, LED-lighting in the interior, and easily accessible USB ports. What is more, a CCTV system consisting of 7 external cameras and 9 cameras monitoring the vehicle interior will be installed to aid the driver and to enhance passenger safety. The coaches will initially be used on Bratislava’s high-frequency line 201.

The trolleybus system in the Slovakian capital currently consists of 11 lines, for which approximately 120 low-floor trolley buses are available for service. The fleet will thus be significantly expanded.