Bratislava: Testing new trolleybuses and a tender for new tramways 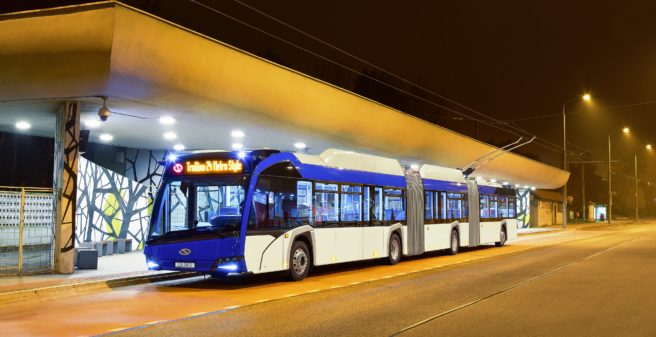 The public transport authority of the Slovakian capital Dopravní podnik Bratislava (DPB) plans to expand its trolleybus operations by purchasing double-articulated trolleybuses and hybrid battery-trolleybuses which are able to cover longer distances off the exting overhead network and subsequently recharge their traction batteries while running again under sections of the overhead line.

Therefore, an articulated hybrid trolleybus of Skoda Electric model 27 Tr with Solaris Trollino IV body was on test in Bratislava for a week at the end of October. The vehicle belongs to a series of 11 such buses in service in Ceske Budejovice in the Czech Republic, where it operates with number 407.

Starting on 9 November 2020, the double-articulated Solaris Trollino 24 demonstration trolleybus is in Bratislava for test runs. DPB wants to use these 24.7 metre long vehicles on the heavily used trolleybus line 201 in the near future. A tender for 16 such trolleys is under preparation. The Trollino 24 will also undergo testing in the cities of Prešov, Žilina and Banská Bystrica.

Additionally, DPB launches a tender process for the procurement of 30 new low-floor tramways to replace existing, older vehicles. With this order, 75% of the buses, trolleybuses and tramways in Bratislava will be barrier-free. An increase of the tender by another 10 tramcars is under consideration.