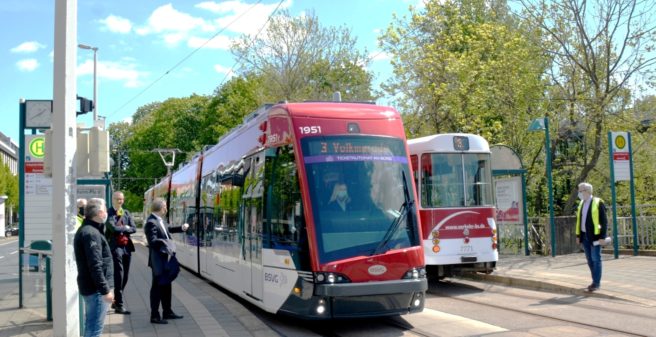 May 6, 2020 at 1 p.m.: Braunschweig’s “Friedrich-Wilhelm-Platz” saw the comparison of the city’s oldest tramway generation and its latest: A 1977-built trailer 7771 stood next to the first “Tramino II” of the BSVG (Braunschweiger Verkehrs GmbH) with tramway no. 1951, which was the very first of this new series to start revenue service.

The vehicle was built by “Stadler Pankow GmbH” which, at first glance, may be surprising: Tramino? Isn’t this brand name used by Solaris from Poland?

In late summer 2018, the owners of Solaris, the Olszewski family, sold their business to the Spanish CAF group (Construcciones y Auxliiar de Ferrocarriles), which had been active in the rail business for a long time and enjoys a good reputation. CAF did not buy Solaris to take over its rail division, but to enter the bus business with Solaris’ bus division. Although the company “Vectia” had already been founded in this field, its success and its market share remained rather limited. Javier Coleman, the new head of Solaris since CAF took over, said unequivocally at a press conference in June 2019: “The chapter of tram construction at Solaris is over.”

Solaris had entered into a cooperation with Stadler in the construction of rail vehicles, and Stadler – took over the product line “Tramino” from the Polish manufacturer in 2019.

In 2014, Braunschweig’s BSVG commissioned a larger number of Traminos, which were still built by Solaris. The first “Tramino II” (no. 1951) was delivered to the BSVG in August 2019 at the depot (UTM reported: https://www.urban-transport-magazine.com/en/first-tramino-ii-stadler-tram-delivered-to-braunschweig/). It is part of an order of altogether seven tramcars of this type. These are four-piece articulated railcars, each of them rests on a bogie mounted in the middle below. Five of the eight axles are motorized.

Originally it was planned to commission the new Tramino earlier, but problems with the bogies of the first new Tramino II led to the decision to replace certain components with new parts. This is also the reason why the remaining 6 new Traminos have not yet arrived in Braunschweig. BSVG: “We now hope to be able to receive the remaining vehicles as soon as possible.”

About the technology of the new Tramino

The BSVG characterizes the new Tramino as “state-of-the-art vehicles”, which differ in some 180 innovative details from their predecessors built by Solaris. BSVG Managing Director Jörg Reincke: “The interior is decorated in lighter colores than the previous models.” This makes the tramway interior much friendlier.

Passengers can enter and leave the new Tramino II via six sliding doors. There are 80 seats and 120 standing places. The seats in the double seats are set against each other by five centimeters each, which provides more comfort.

Frank Flake, Chairman of the Supervisory Board of BSVG, points out that the new Tramino II has a second wheelchair space, in contrast to the previous model. “It leads,” says Flake, “not only to more comfort, but also to a greater degree of safety for our passengers.”

BSVG is investing 18.9 million euros for the new trams. This translates into a unit price of 2.7 million euros per railcar. The Niedersächsische Landes-Verkehrsgesellschaft (Lower Saxony regional transport company) provides a 50% grant.

At the presentation of the new Tramino II, BSVG Managing Director Reincke said that for every new Tramino low-floor tramcar commissioned, an old train with high floor-specifications built between 1974 and 1981 will be retired. “Soon our passengers will no longer have to climb the steps when travelling by tram.”

Immediately after the presentation at Friedrich-Wilhelm-Platz, Tramino II began regular service at line 3 to Volkmarode.