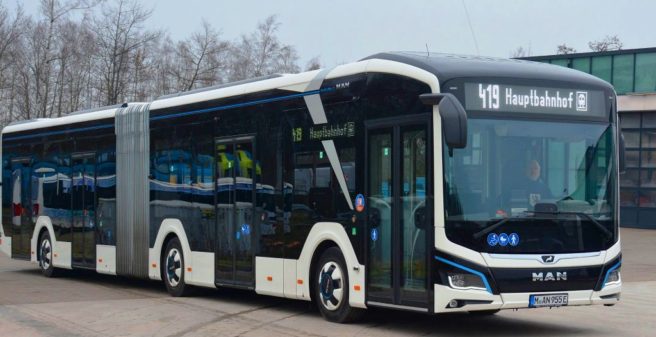 At the beginning of 2014, a new era in municipal bus operation began in Braunschweig: BSVG (Braunschweiger Verkehrs GmbH) started service with its first battery-electric bus no. 1401, a “Solaris Urbino 12 electric”.  It was followed in late summer of the same year by the first electric articulated buses of BSVG, four “Solaris Urbino 18 electric”, with cars 1412 to 1415.

These e-buses were designed for recharging during operation on the line. Braunschweig relied on Bombardier’s “Primove” underground recharging system, which was used only in three cities: Berlin, Braunschweig, and Mannheim.

Berlin and Mannheim abandoned the Primove system pretty soon, in Braunschweig it still used today. The corresponding buses from Berlin and Mannheim are offered for sale. Braunschweig remains faithful to the Primove system, but plans to expand it did not materialize. Of course Braunschweig, one of the pioneers with battery-electric buses in 2014, also wanted to get in on a large scale with electric buses very quickly, but nothing came of it. Instead, it was said: “We want to wait and see how the electric bus continues to develop.” UTM reported on the topic here: https://www.urban-transport-magazine.com/en/future-development-of-braunschweigs-public-transport-network/.

Now, almost eight years later, Braunschweig is moving forward with battery buses. Since Saturday, 15 January, 2022, BSVG is testing an electric articulated bus of the type “MAN Lion’s City 18 E” on its lines 411, 419 and 429 (the latter the two circle lines running in opposite directions). Its operational schedule is deliberately designed so that the vehicle can cover a particularly large number of kilometres, thus demonstrating the range it can achieve. For example, on Saturday it is supposed to run 278 kilometres in 20 hours on lines 419 and 429.

The batteries have a combined capacity of 640 kWh. They are charged exclusively during the nightly shutdown at the Lindenberg depot. Since there is no permanently installed charging device for such an “over-night-charger” at the moment, but only a mobile charger with a power of only 50 kW, BSVG expects that the bus will have to be “plugged in” for about eight hours for full recharging.

Jörg Reincke, head of BSVG, says: “It is valuable that we can test the bus not only for one day and especially in normal regular service, The experience we are gaining now with this battery-powered articulated bus will be of great use later when we put such buses into regular service.” After all, the process of electrifying Braunschweig’s bus fleet has long since been initiated.