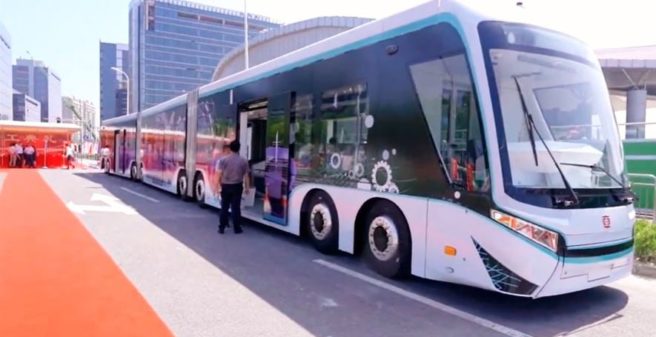 Once again a proposal for a new public transport system comes from China: CRRC Puzhen presented a 30.5 meter long, eight-axle, full-electric double articulated bus for bi-directional operation at a trade fair. The eight axles are located in pairs on either end of the vehicle and under the two articulations. Optical lane guidance on reserved track with its on right-of-way and various technical features derived from the autonomous driving technology allow for up to 70 km/h Vmax. Charging power is provided via pantographs on dedicated locations along the

The vehicle is low-floor over the entire length, except for the driver cabs. The interior design with longitudinal seats allows for frequent passenger changes – total capacity is 302 passengers.

The manufacturer has not yet announced a partner for commercial operation of the new system. A few years ago, CRRC Zhuzhou presented a similar technique, which has been introduced as a “trackless tramway” in the city of Zhuzhou as part of its public transport system. However, the vehicles’s exterior design is more in line with conventional low-floor trams, while the “Digital-Rail Rapid Transit” of the CRRC Puzhen now on offer has more similarities with bus design. But this undoubtless leaves room for interpretation…