Bus Rapid Transit: The future of public transport in Clermont-Ferrand 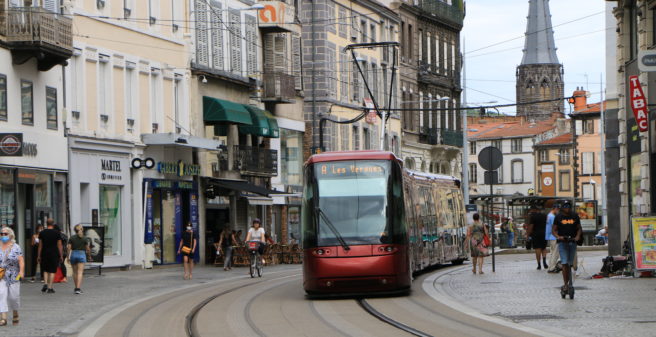 Located in the French Massif Central, Clermont-Ferrand, well-known for hosting the headquarters of the tyre manufacturer Michelin, will use battery-electric buses for the expansion of its urban transport system, following the recent introduction of such vehicles on BRT-route 4 in Nantes. Further investments in the only line of the rubber-tired tramway (or guided bus) system called Translohr were currently also on the agenda. However, its long-term future remains unclear, although five new trainsets had been added to the fleet only last year bringing the total fleet number to 30 vehicles. The construction of two lines of a traditional, modern low-floor tram, is no longer considered as a viable alternative, which most likely would have meant that the Translohr would have been converted in the longer run.

A decision to give preference to an electric bus rapid transit (BRT) system was made by the city government two years ago – at the same time, the mayor had announced investments of at least EUR 240 million for the expansion ofthe two most heavily loaded bus lines B and C. This was intended to create a separate right-of-way for the two lines and to convert the lines into battery-electric articulated and double articulated bus operations. In the future, they will connect Place Allard in the Royat district with Aulnat Airport over a length of 11 km (line B). The second, 17 km long line C will operate between the district of Tamaris and the Lycée Descartes in the southeastern part of the city. The two lines were designed to supplement the Translohr line A and were already opened in the current format as early as 2006 and 2014.

Although there are already shorter segregated sections along the lines, Clermont-Ferrand has still quite a way to go to achieve a “real” BRT (Bus Rapid Transit) operation, in France also referred to as BHNS (bus’s haut niveau de service). The operator Transports en commun clermontois (T2C) currently operates IVECO Crealis Neo 18 articulated buses on lines B and C.

The only Translohr line A was introduced as the first application of this new public transport system in France in 2006 but has been struggling since the beginning with various system-related technical problems compared to a conventional steel-wheeled tramway. The expansion of the system, as well as the conversion into a tramway, was considered at the political level until two years ago, when the decision to build a full-scale BHNS system was reached. Among the key factors were cost considerations: The construction of line B as a tramway or Translohr had already shown a cost estimation of more than EUR 180 million.

A project office is currently in charge of the detailled planning process, and construction is expected to begin in 2021. Both of the new BHNS lines B and C are expected to be completed in 2025. Clermont-Ferrand expects to increase passenger numbers from currently 33 million per year to 52 million by 2032.

This seems like an obvious location for dynamic charging (In Motion Charging). So many eBRT lines are being built with dynamic charging because of the limitations of static charging electric buses, and the catenery support structure and power supply is probably largely convertible to trolley wires. Does anyone know if dynamic charging is being considered for these lines? For more background on dynamic charging see https://www.nationalobserver.com/2018/12/19/opinion/battery-trolleybuses-ready-heavy-duty-climate-action