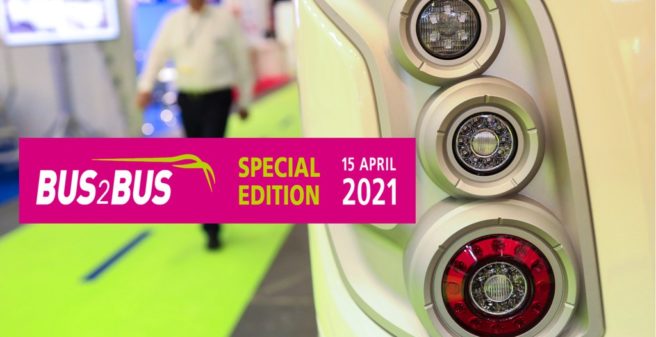 For several years now, Berlin has been home to the bus trade fair and conference event “BUS2BUS”. This year was no exception, although it had to be conducted digitally, due to Corona. The conference was held under the guiding idea of where the future of the bus is heading.

Karl Hülsmann, President of the Bundesverband der Deutschen Omnibusunternehmer (Federal Association of German Bus Operators – BDO), and Mr Ecknig from Messe Berlin came to the conclusion in their opening statements that the bus is an extremely flexible means of transport, without which a “transport turnaround” is not possible. Since the Corona pandemic has plunged the bus industry into considerable existential problems, the financial aid being granted to the industry by the Federal Government so far needs to be extended and adjusted. The high speed at which bus technology is changing and the industry’s great openness to new technologies justify this public support.

The question for the coming year 2022 is: “How can we restart the industry? And in conjunction with that: “Are we allowed to do so?”

In his welcoming address, Federal Transport Minister Andreas Scheuer said that the Federal Government’s objective us “more mobility with less traffic”. The bus is “usable everywhere, flexible and affordable”. This makes the bus industry a “key factor for mobility”.

Scheuer: “In the interest of our environment, we must focus even more on alternative drives.” Which of course includes battery-electric buses, but also buses with hydrogen fuel cells and those powered by biomethane. Already today, 12% of all public buses are powered by alternative drives. For the future, a “modern mobility mix” will be crucial.

Scheuer also announced his intention to significantly modernise the legislation for autonomous driving. “Our goal is to create a flexible legal framework that gives the autonomous bus the liberal framework it needs to really develop.” Scheuer concluded by summing up: “The bus will always play a decisive role.”

Tristan Horx and Dr. Stefan Carsten, “futurologists” from Vienna and Berlin, addressed the question of what the future of the bus will look like. Their introductory statement: “The bus with a combustion engine is dead.”

At the moment, passenger numbers in bus transportation are “at their lows” due to the Corona crisis, but it will not stay that way. During the pandemic, passengers developed ahabit to avoid crowded places like public transportation means and instead refocused on travelling individually in their own cars. “People are no longer willing to share their transport space.” Accordingly, they talked about a “renaissance of the car”. “This,” they agreed, “is not going to go away any time soon.” For the future the question is: “How do we manage to reconcile passengers’ desire for individual transport with the realities of public transport?” Because: “Freedom and independence are the preambles of the mobility of the future.”

That’s where offers like “on-demand services” come into play. And in connection with that, autonomous buses. The legal framework for such autonomous buses must finally be expanded so that they can actually be put on the road. The time when autonomous driving only seem suitable for minibuses or at best midibuses is over. “The bus industry has long been working on “full-blown” autonomous buses.”

In the course of three interactive expert talks, various currently relevant topics of the industry were discussed:

At the Tech-Boost the focus was on achieving the transition to sustainable mobility in light of the pandemic. Companies offering smart mobility solutions exchanged ideas on new standards. At the second Tech-Boost Session, global players discussed hydrogen power solutions as climate-friendly drive technologies. At the “Fresh Travel session”, experts examined how customer needs can become focus of innovation in the bus tourism industry.

For the coming year, the BUS2BUS team is planning an innovative exchange with a focus on the bus industry, with its concept as a face-to-face event, currently scheduled for 27 and 28 April 2022.

The following companies, among others, received the Sustainability Award in different categories:

In 2012, Solaris put its first battery-electric bus on the roads. In the meantime, more than 1000 electric buses have left the factory in Bolechowo. The prize at BUS2BUS went to Solaris for its “Urbino 15 LE electric”. This is also an acknowledgment of the importance of Solaris as a pioneer of electric mobility.

CMF converts diesel buses into hybrid buses. They consume less fossil fuel because they cover part of their distance with electricity that they recuperate themselves when braking.

The prize for the most innovative natural gas bus went to the “Iveco Crossway LE Natural Power”, which convinced the jury above all with its range of 600 kilometres.

In the category of minibuses and midibuses, the prize went to MAN for its MAN eTGE Kombi. It is a minibus for eight passengers whose batteries have found their place under the floor of the passenger compartment. And thus impressively disproving the rumour heard time and again that the batteries of electric buses have to be terribly large, heavy and bulky. (And that the batteries always have to be on the roof or in the rear).

In the interurban bus category, the prize went once again to MAN, for its “Lion’s Intercity”.

The price for the most innovative coach was awarded to the all-new Volvo 9.700 DD (double decker).