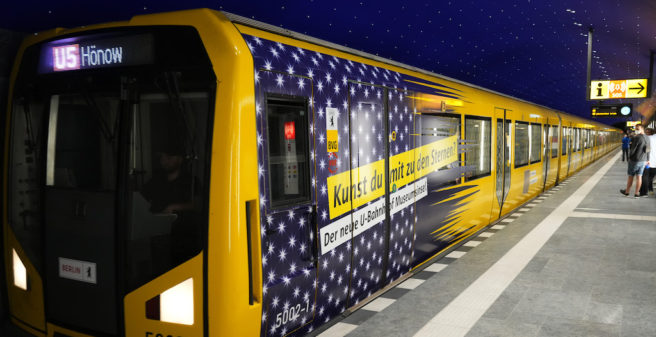 Berlin’s BVG and its Projekt construction company opened the gates of the new metro station Museumsinsel to all passengers on 9 July at shortly after 11 am. This means that the last of the three new U5 stations has now gone online. Around 15,000 people will get on and off there every day. A special eye-catcher of the station is the starry sky consisting of 6,662 light points.

The sky beneath Berlin

The new station is located on the eponymous Museum Island, below the Spree Canal. Due to the special location, only the two ends of the station could be built using the open construction method. The entire platform area had to be constructed in the protection of a huge body of ice using the mining method. The 28,000 cubic metre frost body was created by means of elaborate icing boreholes and calcium chloride brine at -37° Celsius. The walls and columns are covered in blue granite from the Fichtelgebirge. Images of Museum Island adorn the surfaces behind the track. The station has four entrances and exits. Two in front of the Humboldt Forum in the New Palace and one each in front of the Crown Prince’s Palace and the German Historical Museum. Work was still underway on these and the intermediate levels when the gap was closed last December, but until today the U5 trains ran through the station without stopping.

Michael Müller, Governing Mayor of Berlin: “The new Museumsinsel station sets a new scene for the historic centre of Berlin with its wonderful starry sky. Not only do we have the opportunity to get on and off the train at this significant place in Berlin, but the new station also shows that architecture and the expansion of public transport interact excellently at this location. This transport project enriches our city both aesthetically and in terms of transport.”

Ramona Pop, Senator for Economic Affairs, Energy and Operations: “With the completion of the Museumsinsel underground station, the U5 line gains even more attractiveness. This extraordinary station offers better accessibility to the sights in Berlin’s historic centre. Despite the Corona crisis, the underground station is available to Berliners and guests of our city earlier than expected, which is a great achievement.”

Regine Günther, Senator for the Environment, Transport and Climate Protection: “The last station on the U5 is opening – and it is one of the most beautiful of all: you can now actually look up at the starry sky at the Museumsinsel underground station. In this respect, this place in the heart of the city contributes to making public transport a point of attraction. The entire line from the eastern outskirts of the city in Marzahn-Hellersdorf to the main station has been completed, and the highly attractive, fast connection from Hönow to the new Mitte is now in place. Berliners on their way to work will appreciate this just as much as the guests of our city.”

Eva Kreienkamp, CEO of BVG: “With the opening of the Museumsinsel metro station, we have not only completed the gap closure, but also once again improved our transport services. Thanks to the unique architecture of the station, Berlin’s historic centre now has one more attraction.

Dr. Rolf Erfurt, Director of Operations at BVG: “Around 125 years after the first sod was turned on today’s U1, we have shown at Museumsinsel station what has been done in underground construction during this time. Building a station in a huge body of ice underneath the Spree River is nothing less than a masterpiece of civil engineering.”

Max Dudler, architect of the station: “Our architectural theme is derived from the lack of natural light underground: the eternal night. That’s why we designed the two arched platform tunnels in a luminous ultramarine blue, based on the historic stage design for The Magic Flute by Karl Friedrich Schinkel. 6,662 light points make the tunnel shine like a vaulted starry sky. The recourse to Schinkel’s theatre idea is at the same time a reference to the classicist spirit that characterises the buildings at this location in the city.”

We reported on the opening of the U5 extension to Hauptbahnhof in December 2020 here.