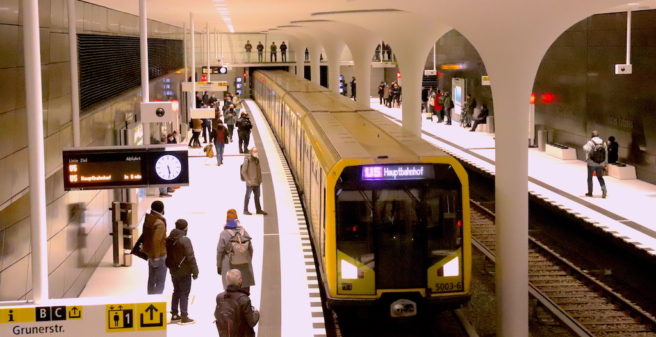 On 4 December, after 25 years of construction (with interruptions), the 2.2 U5 extension between Alexanderplatz and Hauptbahnhof was put into service I © UTM

On Friday, 4 December 2020, the Berliner Verkehrsbetriebe (BVG) inaugurated the 2.2 km extension of the U5 line from Alexanderplatz to the main station. With 22 kilometres of track between Hönow and the main station, line U5 now the second longest metro line in the capital. Trains with passengers stopped for the first time shortly after 12 noon at the two new metro stations Rotes Rathaus and Unter den Linden.

Prior to this, Berlin’s governing mayor Michael Müller, BMVI (Federal Ministry for Transport) state secretary Dr. Tamara Zieschang and BVG board chairwoman Eva Kreienkamp had paid tribute to the importance of the “gap closure U5” for Berlin at the metro station Unter den Linden. They thanked all those who had contributed to the successful completion of this major project. Due to the Corona pandemic, the small ceremony took place without guests. Berlin’s transport senator Regine Günther handed over the certificate of approval to the BVG. Together with the BVG supervisory board chairman Senator Ramona Pop, the works director Dr. Rolf Erfurt set all signals to green at 12 noon at the metro station Rotes Rathaus and sent the first train on a free ride from Hönow to the main station. Many passengers and fans flocked to the new line in order to visit the new stations and take pictures.

A good three decades after the fall of the Wall, Berliners between east and west will be better connected via the new connection which is running below Berlin’s boulevard street „Unter den Linden“, the Brandenburg Gate and the German parliament (Bundestag).

More than “just” closing a gap

With 2.2 kilometres of new tunnel between Alexanderplatz and Brandenburg Gate, the gap between the “old” U5 and the U55, which went into service in 2009, has now been closed. Both lines have now been connected to one through-running line U5. Three new metro stations, of which the Museumsinsel station will not be opened until summer 2021, offer even better access to Berlin’s historic centre. BVG expects around 155,000 passengers a day on the new section, who will benefit from, among other things, an additional connection to Berlin’s central station and a new direct connection from the east of Berlin to the city centre.

“Berlin deeply connected“ (German: „Berlin tief verbunden“): The motto of the opening did not only describe the closing of the gap on the U5 line itself. For example, the possibility of interchanging between the S-Bahn and U-Bahn at the Brandenburg Gate will create new connections within the city. But above all, the new metro station Unter den Linden has it all. There will now be a transfer between lines U5 and the U6 which running in a north-south direction.

The U6 trains between Alt-Mariendorf and Alt-Tegel have been stopping at the upper platform of Unter den Linden since 12 noon on 4 December 2020. The former U6 station Französische Straße, which is only a few metres away by foot and almost two hundred metres of track, was simultaneously taken off the network and will remain closed in future. BVG expects around 50,000 changes between the U5 and U6 metro lines at Unter den Linden station every day.

Under the management of Ute Bonde and Jörg Seegers, the “U5 gap closure U5” between Alexanderplatz and Brandenburg Gate was managed by the BVG subsidiary “Projektrealisierungs GmbH U5”, which was founded in 2014 for this purpose and has been called “BVG Projekt GmbH” since the beginning of 2020. After completion of the metro station Museumsinsel, the construction costs – borne by the federal and state governments – will exceed the 525 million euros calculated in 2013 by only a few percent. The BMVI provided grants of more than 150 million euros for the entire project, the section from Alexanderplatz to the main station, including the already completed U55 metro line, as stipulated in the capital financing agreement.

The dimensions involved in the construction of the new metro railway section were enormous: Between summer 2013 and autumn 2015, the 700-tonne “Bärlinde” tunnel boring machine created two tunnel tubes between the Marx-Engels-Forum and the Brandenburg Gate metro station. On peak days the tunnel team managed to drive up to 20 metres. In March 2017 the breakthrough from the new line to the Brandenburg Gate metro station took place. Later, 9,200 tonnes of ballast were distributed, more than 6,000 sleepers and 8,500 metres of rails were installed. BVG’s specialist tradesmen laid around 250 kilometres of cable in the tunnel and the three stations.

The three new stations along the route each have their own unique character. The metro station Rotes Rathaus, for example, located directly in front of the Berlin government headquarters, has two levels: On the upper level is the double-track metro station, below which there is a four-track “deployment facility” for the metro trains. The station, which was built using the top-down construction method, was designed by Oliver Collignon. The seven “mushroom headrests” in the middle of the tracks and the wall and floor coverings of white and black terrazzo are characteristic elements.

The most challenging new railway station in terms of construction is located below the co-called Museum Island, which gives the station its name, below the river Spree. Due to its special location, only the two ends of the station could be built in open construction. The entire platform area had to be constructed using a mining method under the protection of a huge body of ice. The 28,000 cubic metre large frost body was created by means of complex icing drillings and -37° Celsius cold calcium chloride brine. The station, designed by Max Dudler, is still undergoing the extension of access and mezzanine level, which is why it will pass through without stopping until summer 2021. The starry sky, consisting of a total of 6,662 light points, under which the trains will enter the station in future, is already complete.

The metro station Unter den Linden, designed by Prof. Axel Oestreich and Ingrid Hentschel, has a special “connecting” significance. This is where the U5 and U6 lines will cross from now on. The fact that the existing U6 in this area only had to be interrupted for around 17 months during construction is a remarkable planning and construction achievement.

With the 11 metres between the U5 platform on the lowest level and the station ceiling, unusual metro spaces open up at this metro station. Thanks to a total of 183.8 metres of escalators, passengers changing trains do not have to worry about long staircases. Creative accents are provided by the back track walls of the U5 platform, designed by Humboldt University.

The plans for the extension of the U5 line date back to the 1950s. After the fall of the Wall, the extension became topical again to connect the government quarter and the new central station to the Berlin’s metro network. The name “Chancellor’s Metro” (German for „Kanzler U-Bahn“) refers to the then Federal Chancellor Helmut Kohl, as the construction of the line was laid down in the so-called Capital City Treaty at the instigation of the then Federal Government and the line connects the Chancellery and the Paul Löbe House (Bundestag building).

Construction began in 1995, but was stopped by the Berlin Senate in 2002 for financial reasons. At that time, the shell of the main station and the Reichstag were already completed. In order to avoid the reimbursement of 170 million euros in subsidies to the federal government, the line to the Brandenburg Gate was completed. A two-car train was then to commute on one track along the 1.47 kilometre route. Due to further delays, the already completed Bundestag railway station was subsequently used as an event and film location. For example, the world premiere of Angie (a play about Angela Merkal), kart races and a party with Robbie Williams during his tour took place there. Films were also shot here.

The shuttle service on the “mini metro“ line known as the U55 finally began on 9 August 2009, with a train consisting of two cars running every 10 minutes between the main station (Hauptbahnhof) and Brandenburg Gate. The journey took 2 1⁄2 minutes, with only one driver per shift. The federal government contributed 170 million euros to the construction costs of the U55, the total costs amounted to 320 million euros.

The use of eight F79 cars was originally planned for the line. In fact, mainly two of the six existing wagons were used. Due to the lack of a connection to the Berlin metro network, the cars were lowered onto the track by crane through the material inlet on Minna-Cauer-Straße. Two cars were lifted out of the tunnel in mid-January 2013 for maintenance work. In March 2017, the remaining F79s were exchanged for already decommissioned type D vehicles from the 1950s. These were modernised in terms of vehicle technology, but were only used on the line for a short time. Due to the outbreak of the Covid-19 pandemic and the sharp drop in passenger numbers, operations of the U55 were temporarily suspended on 18 March 2020. The section was only put back into service on 4 December as line U5.

A look into the future

What will be the next step of metro planning in Berlin? During the opening of the U5 metro line, the governing mayor Michael Müller (SPD) advocated even more metro extension. He mentioned the connections to the Märkisches Viertel (U8), to the new airport BER (U7) and the U3 from Krumme Lanke to Mexikoplatz. “There are areas where you can simply add two or three more stations to a great offer that is already there,” said Müller. Not mentioned was the planned extension of the U5 from the central station to Turmstrasse, which has been under discussion in recent years. It is currently unclear whether the tram or (and?) the metro will be extended from the main station to Turmstraße. In the long-term planning, the U5 should once run in the west from the main station further through the district of Moabit via Turmstraße, the S-Bahn and regional railway station Jungfernheide to the former airport Tegel. From today’s perspective, this extension is highly unlikely.

At Rotes Rathaus station, a further transfer station has been built conceptually. The future U3 and U10 lines are to run on the lower level of the two-storey building. Since it is not expected that the U3 or U10 will become reality soon, this level was now built as a four-track parking facility for U5 trains. A possible conversion to a later station with side platforms was taken into account.

Further information and pictures can be found here:

A comprehensive report on the history and construction of the U5 can be found on the BVG website:

[…] graffiti in any respect.  The central a part of the road has three new stations and value about 550 million euros.  In NYC, an identical current challenge value 4 billion […]

[…] stations had no graffiti. The central part of the line has three new stations and costs around 550 million euross. In NYC, a recent similar project cost 4 billion […]

[…] stations had no graffiti. The central part of the line has three new stations and costs around 550 million euross. In NYC, a recent similar project cost 4 billion […]