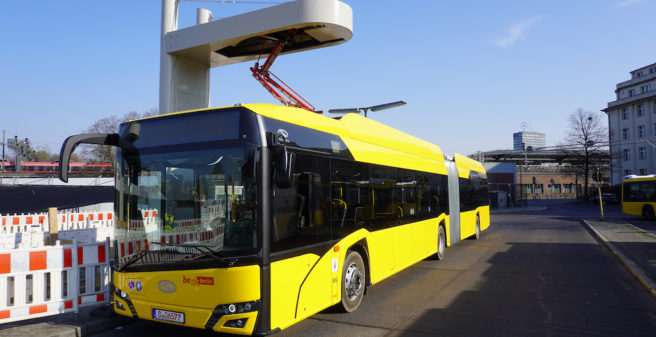 BVG’s slogan “No fuel, I’m going to being charged” (German: Nein tanke, ich werde geladen) will soon be rolled out on six further bus routes in Berlin. The state of Berlin and the Berlin’s public transport operator BVG are invested into Berlin’s e-bus fleet. The first of a total of 90 Solaris New Urbino 12 Electric vehicles have been delivered to Berlin and will enter service soon. In parallel, 17 articulated e-buses are being commissioned. Those will start operation in summer 2020 on the so-called Metrobus line 200 under the project name „E-Metrobus”.

The first out of 17 Solaris Urbino 18 meter electric buses has been delivered to Berlin at the end of March 2020. 16 further buses will follow in the upcoming few weeks. Solaris ensures to keep up with the deliveries despite the corona crisis. After testing, the new electric buses will replace the diesel buses on line 200 this summer. An exact date has not yet been communicated.

The articulated e-buses are 18 meters long and offer space for 99 passengers. For the first time in Berlin, the new vehicles will be recharged via charging stations with inverted pantographs, supplied by Siemens. The recharge at the terminus only takes a few minutes. The first unit at Hertzallee near the Zoo station has been set online in March 2020.

The E-Metrobus R&D project is supported by a research cooperation with the Technical University of Berlin (TU Berlin) and the Reiner Lemoine Institute.

The e-buses and recharging infrastructure are part of the “E-MetroBus” research and development project. The total project volume is around 16.74 million euros. The BVG assumes the costs that would have been incurred for comparable diesel buses. The project is funded by the Federal Ministry of Transport and Digital Infrastructure with a total of 4.3 million euros under the funding guidelines for electric mobility. The State of Berlin bears the remaining additional costs.

In addition to the 17 articulated electric buses, the state of Berlin and the Berliner Verkehrsbetriebe (BVG) are currently also purchasing 12-meter standard electric buses. Also in March, the first of a total of 90 Solaris New Urbino 12 Electric vehicles has been delivered to BVG.

The size, capacity and charging technology correspond to those of the predecessor model, which went into operation at BVG on line 300 last year. We reported here:
https://www.urban-transport-magazine.com/en/new-partial-electric-bus-line-300-opened-in-berlin/

However, trained eyes will recognize that the buses have undergone a small facelift.

The first 30 electric buses of the new batch will come to Berlin until early April. 60 more buses will follow from early August to the end of the year. Together with the 15 Mercedes and Solaris e-buses delivered last year and the Solaris e-bus from the Mobility2Grid research campus, Berlin’s electric bus fleet will then include 121 electrically powered monoplanes. BVG saves around 8,000 tons of CO2 annually. All e-buses will be maintained and parked in the Indira-Gandhi-Strasse depot. In order to recharge the 12 meter buses, BVG is adding another 83 to its 30 charging stations, which are supplied by Ekoenegetyka. Reloading takes place with a 150 kW plug-in charge.

In addition to lines 142, 259, 300 and 347, passengers will see e-buses on lines 147, 155, 250, 294 and N50 from April on. BVG’s electric buses will therefore be part of the cityscape in Hohenschönhausen, Pankow, Niederschönhausen, Friedrichsfelde and Wilhelmsruh. The cost of the 90 new vehicles including the required charging infrastructure is estimated at around 61 million euros. BVG plans to procure a total of up to 210 electrically powered monoplanes during the run-up phase. This project is funded by the Federal Ministry for the Environment, Nature Conservation and Nuclear Safety with up to EUR 35 million and the Federal Ministry of Transport and Digital Infrastructure with up to EUR 12.7 million. The BVG covers the costs that would have been incurred for comparable diesel buses. The State of Berlin also bears the remaining additional costs in this case.