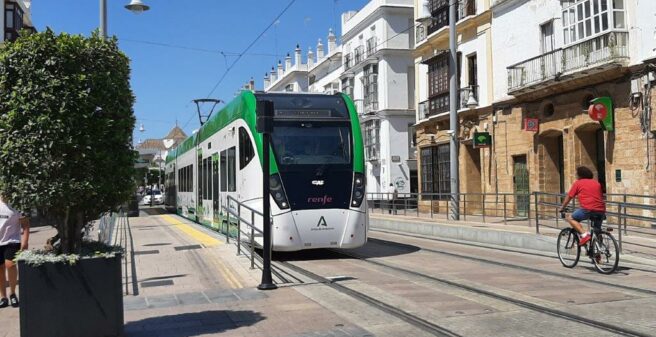 “TramTrains” are trendy! In various regions of Europe such systems have been and are being built, but the name is widely used for different types of operation – only in a limited number of locations railways and trams/light rails actually share the same track. A first such system in Spain now opened: The TRAMBAHIA started operation today, on 26 October 2022, with an official inauguration ceremony by Spanish Minister of Transport Raquel Sánchez, Andalucía‘s Regional President Juan Manuel Moreno and other regional and local representatives.

It has truly been a long journey:

After 25 years of planning and re-planning, more than 15 years of construction and more than 8 years after delivery of the first vehicles, the new line now runs over 23 km from the provincial capital of Cádiz via San Fernando to Chiclana. The first 10 km use the main line of the Spanish state railway, which connects Cádiz, located on a peninsula, with San Fernando on the mainland via a narrow land bridge. This is also the reason why the new line runs on 1,668 mm Spanish broad gauge, even though vehicles and infrastructure provide some options for a possible change to European standard gauge in the future. At the entrance to San Fernando, the TramTrains start to use their own alignment, which takes them right through the town, with track looping at narrow points in the course of the main road. This is followed by an interurban section, and finally TRAMBAHIA runs all the way through the narrow streets of the municipality of Chiclana where it ends at the south-eastern edge of the town in an industrial area. The depot is also located there. The line is operated between Cádiz and San Fernando at 3,000 V DC, the remainder at 750 V=.

A total of 21 stations are served by the line. Cádiz has approximately 117,000 inhabitants, San Fernando 95,000 and Chiclana 83,000. During the summer, there are a considerable number of domestic and foreign tourists, too – so there is undoubtedly passenger potential. On the entire route, there is an approximate hourly frequency every day, with  additional services between Rio Ardillo and Chiclana which provide connections to RENFE regional trains.

Why did it take so long?

There are several reasons for the considerable delays in realisation of the project:

Large parts of the alignment and also the tracks within San Fernando and partly on the interurban section were already completed in 2011. But after that, progress was agonisingly slow – there was simply a lack of money. A total of 267 million euros were spent, 99 million of which were EU subsidies, the repayment of which was discussed for a long time due to the delayed commissioning. In the end, however, the regional government was able to prevent this once again.

But now all this should soon be forgotten, the seven three-car TramTrain trains from the local manufacturer CAF are now operating the regular services. They are 38.1 m long, partially low-floor carriages, which are to offer space for up to 287 passengers, 92 of them seated (standing room 8 persons/m2).

The entrances are adapted for stops at high platforms on the state railway line and low-floor stops on their own track section, two each are high and low. This is why there are different floor heights inside the vehicle.

The approval procedure was undoubtedly complex, as the trains have to be able to run both as trams in the street, on their own interurban line and on the state railway with its underground section in the urban area. Different train protection systems are therefore on board the trains, which are approved for Vmax 100 km/h on the main line.

Three more trains are currently out to tender, in view of expected higher passenger numbers.

If the system proves its worth, future connections to Puerto Real, Puerto de Santa María and Jérez de la Frontera, among others, are envisaged; a short extension to the old town of Cádiz would also make more than sense. There have been plans for this for a long time, but let’s wait for the acceptance of the first line.

Good luck and many passengers for the new Trambahía!