Caetano and Toyota: first orders for hydrogen buses in Barcelona, Bielefeld and Niebüll 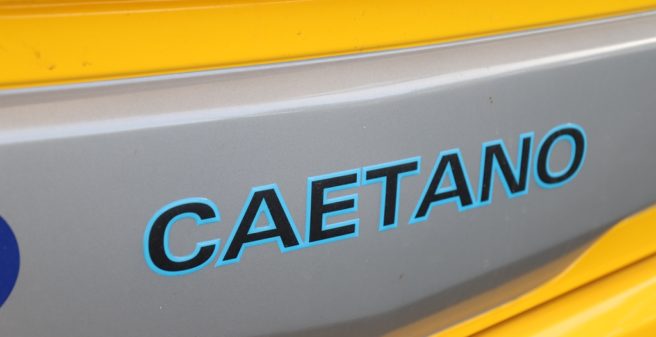 Probably almost everybody has been on a Caetano bus at some time or another without realising it. For decades, the Portuguese bus supplier has been building high-capacity buses for airport applications, which in turn are distributed by the Cobus brand. For some time now, the Porto-based manufacturer has also been active in the market for electric and hydrogen buses. The first so-called e.City Gold electric buses went into operation in Porto and Lisbon in 2017, and in addition to the diesel variant, Caetano also has a natural gas variant in its range. Now the manufacturer is going one step further: together with the Japanese manufacturer Toyota, a fuel cell bus has been developed that goes by the name of H2.City Gold and was first presented at Busworld in Brussels in 2019. The H2.City Gold is available in two lengths: 10.7 and 12 metres. The hydrogen tanks are located on the roof and allow a range of 400 km.

In the current H2 bus order, Caetano, together with Toyota, has been successful in three cities: Barcelona recently ordered eight fuel cell buses, Bielefeld four and the operator DB Autokraft two for use in Niebüll in Northern Germany. The latter are to be delivered before the end of this year and will be fuelled with hydrogen produced from wind power as part of the eFarm project.

The Transports Metropolitans de Barcelona (TMB), is the main public transport operator in Barcelona’s metropolitan area and operates a fleet of more than 1100 buses on 102 different lines. The acquisition of eight 12 m hydrogen vehicles by TMB is supported by the European JIVE 2 programme, for the promotion of fuel cell vehicles, co-financed by the European Union.

Adding to this, TMB together with Zona Franca Consortium (CZFB) is going to build a plant for the production, storage and refuelling of hydrogen that is also designed for commercial vehicles. As it will be the first hydrogen filling station of this kind in Spain, besides Caetano’s fuel cell buses, the plant will possibly be opened to other fleets and private fuel cell electric vehicles. “We are extremely honoured that our H2. City Gold units were selected by TMB. We are very glad to support the project of TMB and Zona Franca Consortium towards a more environmentally friendly fleet and we look forward to deliver these hydrogen buses to Barcelona” said Kohei Umeno, Chief Commercial Officer at CaetanoBus.

The ordered H2. City Gold units will be equipped with Toyota fuel cell and will offer a drive range over 400 kilometers with a capacity of 94 passengers. The eight low-floor vehicles with 3 doors will have USB ports installed both in the passenger saloon and also in the drivers’ cabin to enable the recharging of mobile devices during the journey. In addition, the new buses will include several safety features that will support driver’s activity and will help to improve road safety such as a video surveillance system, a Camera Monitoring System to replace traditional wing mirrors and the Mobileye’s Shield Plus to avoid dangerous situations for pedestrians and cyclists.

Surprise: The order for Bielefeld

The contracts have been signed and sealed in October 2020: Bielefeld’s public transport operator moBiel has ordered four hydrogen buses and a filling station. After long preparatory work, the Bielefeld-based transport company has thus taken an important step towards its goal of testing hydrogen technology in local transport. The buses are expected to roll over Bielefeld’s streets at the turn of the year 2021/22. It was agreed not to disclose the purchase prices. The four 12-metre buses will be tested on line 29 (Baderbach – Schildhof). The Caetano hydrogen buses have electric motors with a total of 333 kW (245 HP), two access doors and 37 seats.

The hydrogen filling station is supplied by Framatome from Erlangen, a subsidiary of the French Framatome group. moBiel is building the filling station on the waste incineration plant site in Bielefeld-Heepen, where the buses will also be stationed. moBiel Managing Director Martin Uekmann is relieved to have placed the orders: “When our Supervisory Board decided in autumn 2018 to start testing the zero-emission hydrogen technology in operation, we knew that we would not be dealing with an established series product but with highly innovative technology. Our foresight has been confirmed. It took intensive work and a great deal of patience to clarify all the questions relating to funding, Europe-wide tendering and the award of contracts. But now we have reached the important milestone of the order”, he said, adding that moBiel had found the vehicles and a filling station in a very tight market that fitted in well with the company’s pilot project. The project is worth millions, adds Kai-Uwe Steinbrecher, moBiel’s head of technology. 90 percent for the filling station and 60 percent of the buses will be subsidied. The basis for the calculation of the latter is the difference to the price of an equivalent diesel bus. And he emphasises: “It is only thanks to the funding from the State of NRW that moBiel is able to procure the hydrogen buses and the filling station. Because they cannot yet be operated in an economical viable way. The fuel costs of the four fuel cell buses are also around 60,000 euros higher per year than those of diesel buses.

Caetano is supplying moBiel with four 12-metre H2 City Gold buses. These have only been on the market in Germany since this year and will initially be tested in Niebüll in northern Germany. The five hydrogen tanks, located on the roof, can hold 37.5 kilograms of hydrogen each. According to the manufacturer, this is sufficient for a range of around 350 to 400 kilometres. moBiel project manager Gerhard Sawatzky: “The test operation will show the pro’s and con’s of the technology. In any case, the range is roughly equivalent to what our buses have to manage during the day. This is a great advantage over battery electric buses. This is because the four buses can be in operation all day on the 7.6 kilometre long Line 29 without having to refuel in between. Sawatzky: “This means they fit in well with our operational processes.”

The filling station necessary for the operation of the hydrogen buses will be built on the waste incineration site. A small storage hall for the buses is also planned there. “We can now enter the implementation phase and will promptly enter into the detailed planning and approval procedures with the responsible authorities,” says Kai-Uwe Steinbrecher, pointing the way forward. At around 6,600 square metres, the entire facility, including paths, storage hall, tanks and refuelling equipment, takes up a little less space than a football field. The filling station will operate with a pressure of 350 bar. For passenger cars, 700 bar would be necessary for comparison. When refuelling, Steinbrecher sees another important advantage of fuel cell technology: “A charging process will only take about ten minutes. That is much faster than with battery electric buses”. The plant’s tanks are designed for 1,000 kilograms of hydrogen and are initially supplied by tanker trucks. Uekmann and Steinbrecher also envisage producing hydrogen from the electricity generated by waste incineration. That is why the location at the waste incineration plant was chosen for the pilot project: “With the electricity generated in the waste incineration plant, we could produce green hydrogen for our buses and perhaps also other commercial vehicles in the future. This would be an important contribution to the sector coupling aimed at in the context of the energy and transport turnaround. After all, hydrogen is well suited for linking electricity and heat supply, but also transport, and for operating them as efficiently and with the lowest possible emissions”. However, this would only be feasible for the Stadtwerke Bielefeld group of companies if subsidies were available. The technology is still far from being economically viable.