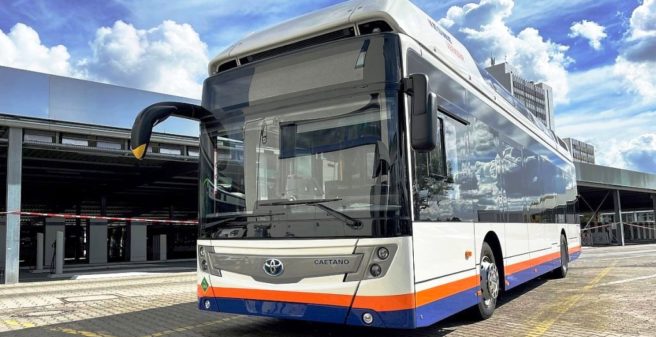 On 5 October 2021, Wiesbaden’s municipal transport operator ESWE presented the first of ten hydrogen fuel cell buses currently on order. Nine additional vehicles are scheduled to arrive in Wiesbaden by the end of the year. According to a press release from the city of Wiesbaden, the buses were put out to tender in June 2020.

Manufacturer of the new buses is Caetano from Portugal – they deliver its „H 2 CityGold” model. According to the city’s press release, Caetano’s offer fulfilled all the desired criteria.

With the commissioning of the new fuel cell buses, the diesel propulsion is becoming less and less important mong Wiesbaden’s city transport. Elena Hof, programme manager of the hydrogen and fuel cell technology innovation programme at the federally owned “NOW GmbH”, said at the handover of the first hydrogen bus to ESWE: “Hydrogen and fuel cell technology is an important future technology for Germany as a business and mobility location. In local public transport, hydrogen propulsion is a sensible addition to battery vehicles for achieving climate targets, especially for long and topographically demanding routes.” This is an important statement, because Wiesbaden’s ESWE also rely on electric battery buses (Mercedes-Benz eCitaro).

At their depot near Wiesbaden central station, ESWE have already had a year’s experience with a hydrogen filling station from which a rented fuel cell bus has been refueled. Therefore, they know that a refuelling process takes significantly less than 15 minutes.

Wiesbaden’s head of transport Andreas Kowol: “Today, no one can say with certainty whether hydrogen or battery buses will ultimately prevail or whether both systems have a future alongside each other.”  For this reason, ESWE is using both systems and is gathering experience with them in an open-ended manner. In any case, the goal of climate-neutral public transport is being approached.

The new fuel cell buses will preferably be used on longer routes. Their purchase has been funded with 1.95 million EUR by the European Union’s JIVE project (JIVE = Joint Initiative for Hydrogen Vehicles across Europe). Another 1.685 million EUR come from the “National Hydrogen and Fuel Cell Technology Innovation Programme” (NIP) of the Federal Ministry of Transport.

Wiesbaden’s Caetano H 2 have two doors, but a three-design is also available.

Read also our report about the order of the buses in January 2021 here:
https://www.urban-transport-magazine.com/en/10-caetano-fuel-cell-buses-or-eswe-wiesbaden/