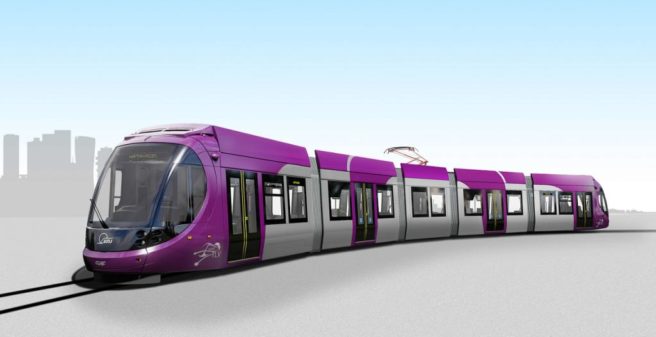 In the Tel Aviv metropolitan area – also known as the Gush Dan region – an extensive rail transport system has been designed and is being realised in various phases. Three light rail lines and three metro lines are part of it, as well as a suburban railway-like system. The system has been under construction in various stages for some time. Other sections are still to be awarded. This also includes the Purple Line as a low-floor light rail system, which has now been awarded by NTA (Metropolitan Mass Transit Systems) to a consortium made up of Spanish CAF Group and the construction firm. NTA is the company in charge of providing the most appropriate solutions to meet transport demands in the Tel Aviv metropolitan area. It is currently building the main public transport system in the Gush Dan area, the largest transport project ever undertaken in Israel, in terms of both volume and complexity.

The Purple Line project forms part of the Gush Dan ambitious plan for the Israeli metropolis, consisting of the design, construction, financing and maintenance of the city’s LRV system for a term of 25 years. The investment volume is estimated to be in excess of €1.015 Billion.

The new line will cover 27 kilometres connecting a planned total of 45 stations, and will also include a depot where maintenance work will be carried out on the fleet of vehicles. The Purple Line will run from Complex 2000, in the centre of Tel Aviv next to the Arolozorov train station, to connect the city centre with the eastern part of the metropolitan area, with the end section of the line branching off to the Bar Ilan University area in one direction and to the neighbouring city of Yehud-Monoson in the other.

Aside from the construction of the line, the scope of the contract also includes the design and supply of 98 new low-floor Urbos trams, each consisting of 5 modules, spanning a length of almost 35 metres. There is also an option to extend the contract for a further 32 units in the future. The scope of the project for the awarded consortium also includes the supply of the signalling, energy and communication systems, as well as maintenance of the line for a term of 25 years.

The CAF Group’s portion of this project exceeds €525M and consists of the design and production of the new units, the supply of signalling, energy and communication systems in addition to project integration. The Group will also have a 50% stake in the SPV company that will manage the maintenance of the line. The new line is expected to be fully operational by 2027, providing one of the most cutting edge and efficient public transport networks for the inhabitants of the Tel Aviv metropolitan area.