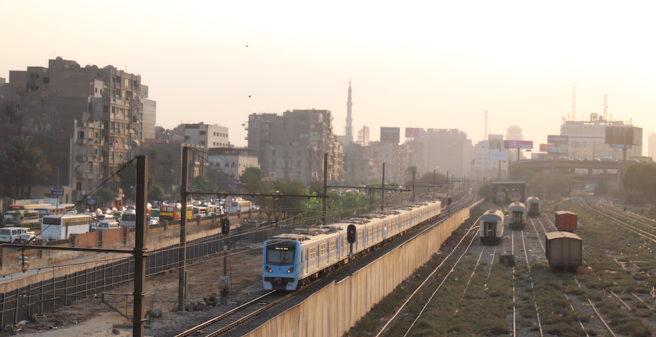 Cairo's metro is being expanded. Line 1 which opened in 1987 as Cairo's and Africa's first metro line, partially runs on the surface as it emerged from two suburban train lines I © Stefan von Mach

According to Egypt’s Transport Minister Kamel El-Wazir, a total of 27 bn EUR (512 bn EGP) is anticipated to be invested until 2024 within the framework of the extension of the Cairo-Gizeh metro network to roughly double its current length of 78 km. Further to that, two high-performance Monorail lines with a total length of 96 km are under construction at a total cost of 4.1 bn EUR (77 bn EGP), so that the network of urban and suburban rail transport may reach about 250 km in the foreseeable future. This will be a major step to reduce traffic congestion and pollution levels in Africa’s biggest city with its 20 million inhabitants, but more will be needed in future to match the density of lines in cities such as Shanghai, Beijing or London. But these investments will also mean a major spending effort of more than 10 % of Government income over the coming five years. With more than 300 mEUR per kilometre, the mostly tunnelled metro projects seem to be extremely expensive in an international comparison where prices vary between 100 and 200 mEUR/km, while the elevated monorail projects are at the opposite extreme with about 43 mEUR/km including rolling stock and 30 years of operation and maintenance.

The metro investment is spread over 22 projects for the extension of the Cairo metro, of which line 3 is currently at 36 % of the rate of execution. Currently, line 3 connects Attaba in east-central Cairo with El-Shams Club to the northeast. The line will eventually extend from the northwest of the Greater Cairo area at Imbaba to the northeast serving Cairo International Airport and cross the River Nile twice at the western branch. Orascom Construction Industries built the first phase of the project. The contactless fare collection system and integrated supervision and communication system was supplied by the French Thales Group.

The first 18 8-car trains have been manufactured in Japan by Kinki Sharyo Co. and Toshiba Corp., while a second batch of 32 trains is currently under delivery from Hyunday Rotem. Each 8-car train is able to transport 1740 passengers. Once completed, line 3 will cross the Egyptian capital from east to west from the airport in the North-East to the western districts of the Nile. Lines 1, 2 and 3 combined will be able to transport 3.5 million passengers per day. The construction of line 4 is about to start and scheduled to be completed in 2024 while the construction of lines 5 and 6 has not started yet and their alignment should probably be reviewed as for the Eastern part of line 4 that had originally been planned along the first part of the New Capital City Monorail.

The Ministry of Transportation signed contracts for two fully automated INNOVIA Monorail 300 lines with a consortium of Bombardier Transportation, Orascom Construction and Arab Contractors in 2019. They stipulate to design, construct, operate and maintain the two monorail projects. The Ministry of Finance, the New Urban Communities Authority, the National Investment Bank, the National Authority for Tunnels, and the Administrative Capital for Urban Development Company are setting up a joint-stock company to build, manage, operate, and maintain the new monorails under the name “United Company for Establishment, Management, Operation, and Maintenance of Metro Lines and Rail Transport”.

The first monorail will link East Cairo in 60 minutes over 54 km to the New Administrative Capital, the second line will connect 6th October City to Giza in 42 minutes over 42 km. Each will carry up to 45,000 passengers per hour per direction when the ultimate capacity with 8-car trains at 75 seconds intervals is reached. When fully operational, up to 1.5 and 0.9 million daily passengers are expected respectively. Orascom Construction designs and builds all infrastructure and civil works, including stations, guideway structures and new depot buildings, while Bombardier is in charge of the electrical and mechanical (E&M) equipment including 70 four-car INNOVIA Monorail 300 lightweight trains, the CITYFLO 650 signalling and automatic train control technology, the control centre, communication systems, platform screen doors and fare collection, power supply and distribution systems as well as turnouts and depot equipment. The system incorporates full automation (driverless operation), emergency evacuation walkways, high-speed guideway switching and bi-directional operation. Station platforms are 100 m long in order to accommodate two 4-car trains.

Main characteristics of the monorail trains:

Further background information about Cairo’s metro can be found here: