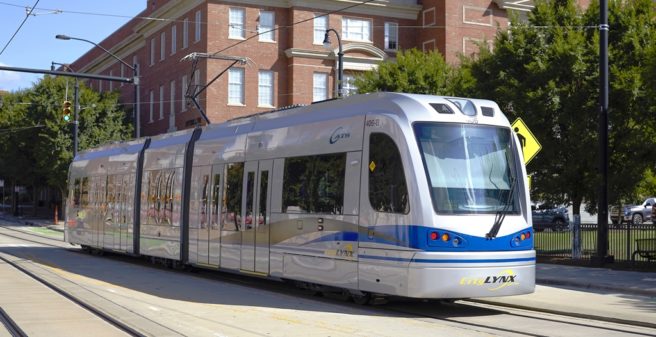 30 August 2021 – a happy day for Charlotte/North Carolina: The “Gold Line” – the city’s streetcar service – was reopened after a break of more than 2 years, and it was extended on both ends by an additional 4 km bringing its total length to 6.4 km. The Gold Line runs cross-town between Sunnyside Ave and French Street and includes a stretch without catenary where the tramcars operate in battery-mode. The new extensions called Phase 2 are part of a wider expansion plan which includes additional prolongations on both termini and will eventually add another 10 km of track. These future phases have not been funded yet, however. Investment cost of Phase 2 was 150 mn USD and was 50% financed by federal funds.

The first part of the line had already been opened in 2015 and was originally operated by retro vintage vehicles delivered by GOMACO and recently been sold to Memphis. These tramcars previously provided a heritage service over the a inner-city heritage line between 1996 and 2010 which got integrated into a new light rail service. This now 30 km long light rail line is branded as “Blue Line” and was opened in stages between 2007 and 2018.

For the extension and conversion of the “Gold Line” into a modern streetcar service Charlotte Area Transit system (CATS) ordered six low-floor tramcars from Siemens Mobility. Siemens supplied its well-known S700 model manufactured at the Sacramento factory. The six new S700 streetcars joined Charlotte’s current light rail fleet of 42 S70 light rail vehicles, bringing the total number of Siemens Mobility vehicles operated by CATS to 48. Each of CATS’ six streetcars S700 features a hybrid wireless technology allowing the vehicle to run both on and off-wire via an Onboard Energy Storage System (OESS). The OESS includes an expandable and modular design that can be updated as battery technology evolves. The battery-storage and energy-saving technology allows the batteries to recharge when the vehicle is connected to the overhead catenary system. The vehicles operate at speeds up to 48 km/h (30 mph) and are capable of carrying up to nearly 195 passengers.

The new Gold Line service operates every 20 minutes every day between 5. a.m and 2.a.m. No fares are charged until January 2022, in order to attract passengers to use the new service.