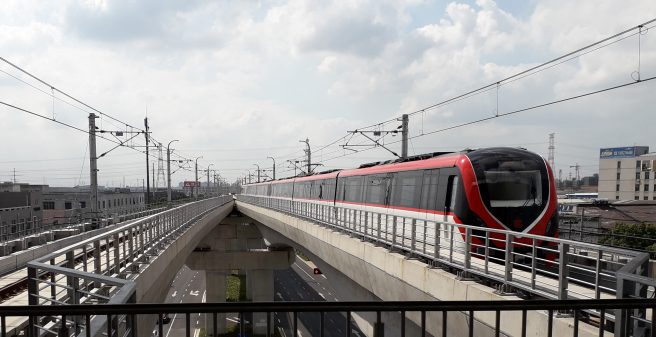 It does not happen very often, but when it happens, most probably it’s in China: Two completely new metro systems open in a time lag of just one week. On 21 September 2019, the first metro line in the city of Changzhou – with a population of a little more than 3 million inhabitants located in Jiangsu Province on the Yangtze Delta at a distance of approximately 200 km west of Shanghai – has been inaugurated.

The first route has 29 stations over a length of 34.7 km and crosses the city from north to south between Senlin Gongyuan and Nanxiashu. Only two stations are located on the 2.2 km elevated section. The remaining track is located underground. The route serves residential areas as well as the main business and commercial district and it also connects to the high-speed railway station and the central bus interchange. In the city center there will be an interchange facility at Wenfugong station with the future, 19.9 km east-west line 2 currently under construction and scheduled to open in 2021. A further four lines are foreseen in the medium-to-long-term planning.

The first line 1 was built in a period of just over three years time as tunneling started in September 2015. The installations were mainly complete by the end of 2018.

A network map can be found here: http://www.urbanrail.net/as/cn/changzhou/changzhou.htm

36 six-car trainsets called “Type B” built by CRRC with a total length of 120 meters and a width of 2.8 meters have a total capacity of 2,062 passengers and offer a 7 ½ minutes headway during most of the day. Travel time from end to end is scheduled 59 minutes. The trains are equipped with MITRAC traction and control systems supplied by Bombardier NUG Propulsion System Co., one of six Bombardier Joint Ventures in China. Power supply takes place via overhead wire. Bombardier NUG Signalling Solutions Co. is also the supplier of the train control and main part of the signalling equipment.

600 km northwest of Shanghai there will open another new metro line – in Xuzhou, with some 3 million inhabitants located in the same Jiangsu Province. It opens just 7 days after Changzhou, on 28 September 2019. Its first line has en extension of 22 km, with 18 stops between Luwo and the Xuzhoudong East railway station. Only the terminus at Luwo is located on the surface, the other stations are entirely underground. This route is only the first step of a wider network: Two additional lines are already under construction, and long-term plans include a network of 7 urban and 4 suburban metro routes in the city. The second line (24 km) is scheduled to open in September 2020, the third line (18 km) just three months later.

CRRC Nanjing Puzhen Co., Ltd is also supplying the trainsets for Metro Xuzhou, 23 6-car trains of “Type B2” are in service on line 1.

A network map can be found here: http://www.urbanrail.net/as/cn/xuzhou/xuzhou.htm

When reporting on China’s metro systems, it is also worth mentioning that completely new lines opened in Zhengzhou and Bejing (Daxing Airport suburban express line) and extensions of existing lines were inaugurated in Wuhan, Xi’an, Wuxi, Ningbo and Shenzhen – in total more than 90 km during the past 10 days since 19 September 2019. And more are yet to come.