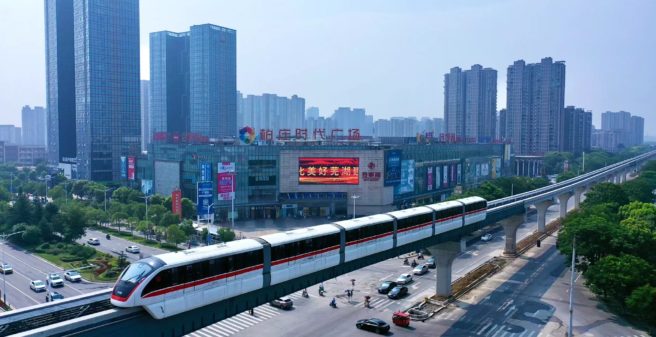 The 30.4 km long monorail line in Wuhu runs in a north-south direction through the city of 3.7 million inhabitants I © Alstom

The first of its kind in China, Wuhu’s new monorail will be elevated and equipped with automatic train operation (ATO) grade of operation 4 (GoA4). The highest level of automation available, GoA4 enables the Innovia monorail to operate fully automated, without driver or attendants.

“The start of operation marks another milestone for Alstom’s Chinese joint ventures, which remain committed to working alongside our customers. Wuhu’s new fully automated and driverless elevated monorail will be a game changer for residents, decreasing their commute time while also reducing congestion, pollution, and carbon emissions in the city. It is an important part of Wuhu’s ongoing efforts to redefine its urban transportation to the benefit of its passengers and the environment. As always, we are committed to helping our customers realize their transportation visions by providing safe, smart, and green mobility solutions,” said Jianwei Zhang, President of Alstom China.

Last month, over 40,000 people experienced the country’s first fully automated and driverless elevated monorail train firsthand during trial runs. For the start of its commercial operation on November 3, the Innovia monorail will depart from Baimashan Station in the south of the city and end at Baoshun Road station in the north. The 25-station line is 30.46 km long and its tentative operating hours from 06:30-22:00 on weekdays and holidays.

Wuhu Line 1’s new elevated monorail operates at a speed of 80 kilometres per hour and has been equipped with ATO GoA4, the most-advanced and highest level of automatic train operation that enables the train to operate both driverless and fully unattended. To ensure the safe, reliable, and efficient operation, the train has also been deeply integrated with key technologies such as track beams, switches, and power supply rails. The train’s passenger compartment offers a clear and open view as the entire train passes through the city emitting low noise and vibration. With strong dynamic performance, exceptional climbing ability and a tight turning radius, the train is well adapted to the needs of an urban landscape. In addition to providing citizens with a safe, convenient, and green transportation experience, Wuhu’s Innovia monorail has also become a recognized part of the Wuhu’s modern and picturesque cityscape.

Alstom in China has thirteen joint ventures, seven wholly foreign-owned enterprises, and over 11,000 employees. Together, the joint ventures have delivered more than 5,900 railway passenger cars, 1,530 electric locomotives, 7,194 metro cars, 536 monorail cars, 168 automated people mover cars and 191 tram cars to China’s growing rail transit market as well as to overseas markets. In China, Alstom also provides customers with a wide range of services solutions, from heavy maintenance to modernisations, and currently has 2,252 metro cars under maintenance contracts. It is a major signalling supplier to the Chinese high-speed network, and through its joint ventures, its signalling systems are utilised in 102 urban mass transit lines and its propulsion equipment are applied in 100 metro lines in Chinese cities.

A map of the new line 1 and the planned line 2 can be found here:

Alstom™, Cityflo™, Mitrac™, and Innovia™ are protected trademarks of the Alstom Group