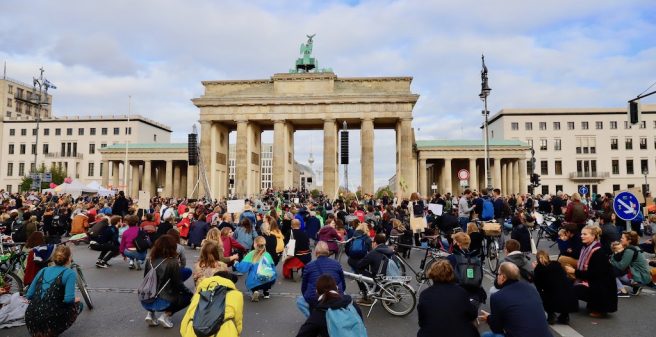 Friday, 20th September 2019 was marked by the worldwide climate day. While the so-called Climate Action Summit took place at the headquarters of the United Nations in New York, Germany’s government decided for a new climate protection program which shall help reducing the CO2 emissions by 55 % by 2030 in comparison to the 1990 levels. The events were paralleled by worldwide climate strikes „Fridays For Future“ – over 5,000 strikes in more than 150 countries took place with teenagers, students and adults participating. In Germany, over 1.4 million people took part in the nation-wide strikes.

The German government presented measures to combat climate change in Europe’s largest economy. The new policy includes the introduction of a carbon pricing system for the transportation sector. Furthermore, a 54 billion € funding package has been released in order to implement measures to reduce CO2.

For many, the policy does not go far enough. Criticism was raised by environmental groups and economists, especially regarding the relatively low carbon price.

Petrol, coal, heating oil and fuel-producing companies will have to buy certificates for the carbon dioxide emissions of their products. Although such a system already exists at European level, but so far only for the heavy industry, aviation and the energy sector. Carbon dioxide emitted in Germany would cost 10 € per ton – the price will rise to 35 € per ton by 2025. Independent environmental groups recommend a CO2 price of 180 EUR per ton which would be necessary to meet the goals.

Regarding concrete measures in public transport, commuters will get compensation through increased tax refunds. Train travel will be made cheaper through the reduction of train tickets while at the same time increasing taxes on short-haul flights.

In the transport sector, there will be further subsidies for electric vehicles will be introduced.

By 2030, the federal government and Deutsche Bahn are investing € 86 billion in the rail network. Freight transport will also benefit from this modernization. This should also bring more goods to the rail. From 2020 to 2030, the railways will receive € 1 billion annually for the modernization, expansion and electrification of the rail network.

What do the people think?

Sophia: For a lot of reasons, actually. On the one I want to feel the movement and to see how many support the movement. This is very important for me to motivate me in the everyday life and to make things differently. On the other hand I am here to send a signal to politics and to the rest of the population.

UTM: What do you expect from the politicians?

Sophia: I do not expect politics to do much, but of course it’s a demand that is there. We want politics to intervene massively and to do more for climate protection and climate justice instead of acting in the interest of the economy.

Theresa: From my point of view, politicians have to change priorities very strongly and focus a lot more on environmental and climate protection. But we are still far from that. That’s what I think would have to happen. Compromise solutions like the CO2 tax and laws are definitely not enough.

Sophie: Public transport must be cheaper than driving a car and it should be subsidised much more. Of course in rural areas such as Brandenburg the frequency of public transport has to improve. The rail infrastructure should be better maintained, as there are often problems with the regionals trains.

Theresa: There should be more rail lines – not less. In addition, subsidies have to be increased so that public transport would be for free or almost for free. And of course there must be much less air transport.

Immanuel: Because we want to show politicians that more people stand up for climate protection than for a world in which I do not want to have children.

Oscar: Because emissions for traffic have not fallen since 1990.

UTM: What do you expect from the politicians?

Sebastian: In terms of traffic, the whole climate package which has been decided today by the government would actually have to be changed again. The commuter allowance will be increased. That’s almost the opposite of what you actually want to achieve. It is absurd that under the name climate protection package a fossil subsidy is increased as commuters will receive subsidies for continuing commuting by car.

Pauline: We have certain demands and they (the politicians) met our demands by no means today. For example, one of our demands is to reduce the coal in the energy mix by 25 % by the end of 2019 and to stop the end of all climate-damaging subsidies. We want the coal exit by 2030 and not by 2038 and the politicians have not even said anything about coal today at all.

Immanuel: And it is very important to introduce a CO2 tax, one that rises very quickly to 180 € per ton. Why 180 €? Not because it’s a number that we’ve invented ourselves, but because that’s the cost of the damage that every ton of CO2 is causing. And if the government decides to pay € 10 a ton, that means most of the damage from climate change will land on our shoulders in the future. We do not want to accept that.

Oscar: The figure of 180 € comes from the Federal Office for the Environment – so it is an officially communicated value.

Pauline: Yeah, but its only for students.

Oscar: Yes, only for students but it is a first step into the right direction.

Sebastian: Instead of a bunch of different subsidies, we finally need measures to reduce individual car traffic. For example, by reducing car lanes or by introducing a city toll. We cannot content ourselves by spending a little bit of money here and there – it is not enough. You also have to use carrots and the stick on the other side. The government has fully forgotten the stick. Without it, we will not reach the climate goals and neither the 1.5 degree target.

Immanuel: In addition, the climate package starts with the wrong initiatives. Electric cars are being subsidized, but we do not need electric cars but cargo bikes and good bicycle lanes. If cargo bikes were subsidized with € 6,000, imagine how many people would be traveling with cargo bikes (all laughing). If we want to have a good climate policy, it has to be socially responsible too, and then we have to think about public transport and on how to make bicycles accessible for everyone.

Kevin: Our office organized a march and we all went together. And of course I want to support the movement.

Luca: I participate because I think that it is one of the most important things these days. We as the young generation we need to spread the word and to make people know what we think because we are the future. So we cannot expect something from people who are older than us. So we have to be the main activists. For us it is a big responsibility but it will be important for our future and for the next generations.

Kevin: We are destroying our planet and we have to do something about this. I mean, it is important that people know what is the actual situation. Some people just don’t care and this is not good for us. We are young and we want a better future for us and for everyone else. We are here because to say that there is a possibility to change the situation.

Kevin: There are lots of bikes and bike sharing offers here. I really like it. May be they are a bit more expensive than public transport but still, it is good and easy to use.

UTM: Which means of transport do you like the most in Berlin?

Luca: My favorite means of transportation is the bike but here I do not have a bike yet (laughs). But I will buy one. So for the time being my favorite transportation are my feet. Everyday I walk to the office.

Kevin: By moving around by bike, you can see the city and enjoy the place.

Luca: Maybe the metro, because its faster. Its different with the tram where you can enjoy the city and understand where you actually are. In the metro, it is a bit weird, when you take it and you arrive somewhere else and you do not even know where you are.