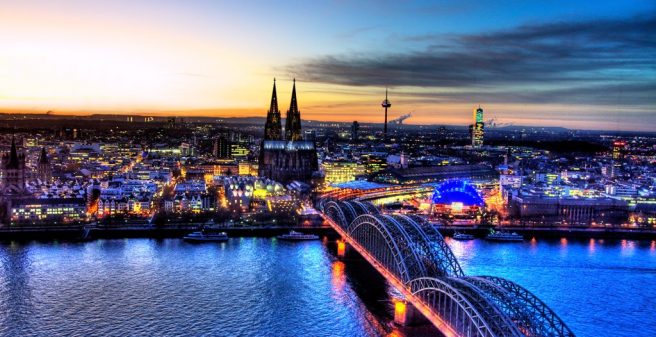 As the first german city with > 1 million inhabitants, Cologne has declared climate emergency. The city council will counteract against emissions and climate change in all future actions - for instance in terms of energy and public transport policies I Photo: UTM

Cologne is the first German city with a population of more than a million people to join the declaration movement. More than 700 cities around the world have already recognized the urgency of the climate crisis by a political decision. This also means, that emission-free mobility solutions will have a priority in all upcoming projects. Cologne wants to decrease the modal split share of all motorised traffic heavily by the year 2025. By then, only 33 % of all traffic should be carried out by car, the remainder being provided by public transport, bikes and walking.

With the declaration on the “climate emergency”, the Cologne city council has declared itself to accept the goals of the Paris Climate Change Agreement. This also includes the introduction of a tool for the city administration to assess the climate impact assessment. The assessment will be compulsory for all upcoming projects with a climate impact in Cologne. This means that alternatives with positive or at least the least negative impact on the climate will be preferably be planned and implemented.

The wave was initiated by an NGO called “The Climate Mobilization“, which calls on governments, cities and communities worldwide to proclaim the climate emergency in order to make projects and decisions that affect the climate as climate-neutral as possible in the future. The participating cities also include metropolises such as Sydney, the Greater London Authority, Krakow, Dublin, Toulouse, Naples and Prague. In Germany, so far the municipalities of Herford, Konstanz, Münster, Saarbrücken and Wiesbaden proclaimed the climate emergency – and now also Cologne.

The political decision is not only important for the Cologne administration, but also a positive sign for the climate movement and “Fridays for Future” movement, which has been campaigning for greater climate protection since the end of last year.

In addition, Cologne’s administration will report annually on the effects and consequences of carbon dioxide emissions and measures to reduce greenhouse gas emissions and further develop the climate protection concept “KölnKlimaAktiv 2020-2030”. The proposed resolution also stipulates that the administration should initiate talks with the municipal utility company with the aim of expanding renewable energies. In addition, a development plan to achieve a climate-neutral energy use of urban real estate as well as the usage of solar power.

Furthermore, the administration should implement a mobility transformation – called Cologne Mobil 2025. The measures described are to be incorporated into the Sustainable Urban Mobility Plan (SUMP) with high priority. The measures of the city of Cologne for climate protection that have already been decided and are being implemented are rated positively. At the same time, the Council acknowledged that they are only the beginning of an urgently needed transformation of the city – a transformation that must lead to a significant reduction in greenhouse gas emissions as soon as possible through technical, social and everyday changes. Significant further efforts are needed to reach the goal of the Climate Neutral Community 2050.