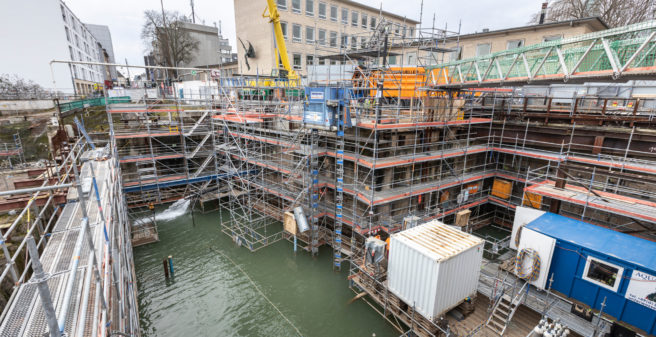 On 3 March 2009, a spectacular accident took place, which was noted not only in the city itself but also had an impact on a much larger scale: In the course of the construction of the “Nord-Süd U-Bahn” (North-South Underground), the excavation pit collapsed at Waidmarkt. This had the devastating consequence that the city’s documentary archivies building collapsed on surface, and two people died. With the City Archive, the “memory” of Germany’s fourth largest city, which is also one of the oldest cities in the country, was wiped out. Cologne goes back to the Romans, and the Celtic Ubians were here before them … And so there were documents in the city archives from those ancient times that could no longer be restored. The archives of neighbouring cities such as Bonn offered “asylum”, i.e. storage facilities for rescued archival documents, and the neighbouring archives also working on the restoration of rescued documents from the catastrophe in Cologne …

The enormous crater that had been formed at the location of the excavation site immediately filled with groundwater. This is not surprising, because the Rhine flows not too far away, and the soil in the Rhine valley consists to a large extent of gravel, which the Rhine has dragged along over the millennia and deposited here.

For a very long time, there was no thought at all of resuming work on the underground construction site, of “healing the bleeding wound” in the city. Of course, coming to terms with the desaster was challenging and to clarify who was to blame for the catastrophe ended up in court proceedings, not least in order to demand compensation from the relevant people in charge.

Finally, in November 2020, construction work on the Waidmarkt track interchange resumed. However, this required extensive preliminary work for static reasons.

For this purpose, the street between “Am Georgsplatz” and the entrance to the Friedrich-Wilhelm-Gymnasium had to be closed to traffic for about a year – with the exception of pedestrians, for whom a 2.50 metre wide footpath was set up on the west side of the construction site. In addition, a three-metre-high noise barrier was built to keep the noise nuisance for residents as low as possible.

The excavation pit itself is secured with a 1.80 metre high so-called head beam made of reinforced concrete. It not only serves to stabilise the pit, but also as a new support for an auxiliary bridge. It will support a steel scaffolding that spans across the entire excavation pit like a lid. All further work will take place underneath this lid, while the road can be restored and reopened. This even applies to regular traffic with articulated buses.

Due to the ingress of water, divers have to be used to work on the actual track change in the underground. Their task is to explore the situation in the structure and to check the diaphragm walls that were erected for further construction.

Preliminary work should be completed by the turn of the year 2021 / 2022. Then the actual rehabilitation of the damaged part of the underground construction site can begin. It is envisaged that the planned deadlines can be met, even though the recent cold spell has led to first delays.

The rehabilitation of the track change

There is a cover and a false ceiling in the area of the track change. Both were already finished at the time of the accident, but were negatively affected by the evidence gathering investigations after the disaster. In addition, there is machinery, work equipment and scaffolding on the lowest level of the structure that had to be left behind after the accident. All this equipment is buried under about 5,000 cubic metres of soil and rubble and approximately 2,000 cubic metres of concrete. It is difficult to remove all this from the excavation pit as long as that cover and the intermediate ceiling are still above it.

Since the excavation pit currently lies in groundwater with a depth of around 6.50 metres below the normal ground level, both the surrounding soil and the groundwater put enormous pressure on the excavation pit from the outside. In addition, one understandably wants to work in the dry at the construction site, which is why the groundwater in the pit has to be pumped out. This further increases the pressure from outside on the structure, and therefore it has to be stabilised by a steel bracing.

The tubes of the underground tunnel, which have already been completed on both sides of the accident site, must be protected against the ingress of debris from the track replacement structure. Therefore, the lowest level of the structure will be backfilled with gravel up to the intermediate ceiling, and then the middle level as well. In order to support the walls of the excavation pit against each other, a temporary steel stiffener is installed. A “dewatering” system makes it possible to lower the groundwater level in the excavation pit to such a degree that work can eventually be carried out in the pit in dry conditions. This will then allow larger machines to be used again.

The excavation pit, which was buried in 2009 during the collapse, is being cleared up step by step from above. At one point in time, there will be a situation where the whole excavation pit will almost completely be under water (groundwater) and therefore work can only be done with divers.

Once the excavation pit has been cleared of everything that ended up in it as a result of the 2009 accident but should actually not be there, the new concrete base of the structure will be poured. It will be connected to the heads of 240 micro-steel piles that will be anchored at a depth of 50 metres in the Tertiary rock layer. This also anchors the concrete base in the ground and secures it against any form of uplift. Later on, once the tunnel tubes are cleared and connected to the track replacement structure, bulkheads and door openings will be installed in the direction of the Heumarkt and Severinstraße stops.

After the floor slab is completed, the area above the track change can also be finished. The walls and a new intermediate ceiling will be built as well as emergency stairwells, supply shafts and a substation for the underground’s power supply. On the top floor there will be a room for any tasks that may become necessary in the future.

The soil conditions in the subsoil of the Waidmarkt track replacement will only be known in detail when the construction work has reached the appropriate depth. Therefore, no one can reliably predict today when the underground will go into operation again. However, the KVB expect that the further the construction work progresses, the more reliable the timing will be. And the KVB are even getting a little bit more specific: at the moment, they expect the opening to take place in 2028 or 2029.

Finally, we would like to mention that there will also be a memorial room in the “Waidmarkt track replacement” building. However, there are no plans yet as to what exactly it will look like. The consortium (Arge Los Süd), which is building the entire structure, will also complete the shell of this room.

And this “Arge Los Süd” will also bear all the costs for the renovation due to the settlement reached with the KVB.