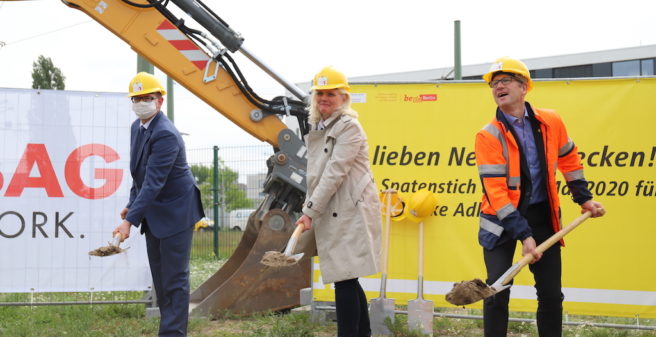 Groundbreaking with (from left to right) Mayor of Treptow-Köpenick, Oliver Igel, Berlin's Senator for Environment, Transport and Climate, Regine Günther and BVG Executive Board member, Dr. Rolf Erfurt I © UTM

Monday, 18 May 2020 did not only mark the groundbreaking of the new tram extension project “Adlershof II” in Southeastern Berlin, but also the first press event since the corona “lockdown”. In the presence of Berlin’s Senator for the Environment, Transport and Climate Protection Regine Günther, BVG Executive Board member Dr. Rolf Erfurt and Treptow-Köpenick’s Mayor Oliver Igel, the construction of the new 2.7 km section between Karl-Ziegler-Strasse and Sterndamm has been officially started.

The approximately 2.7 km route will largely be laid on grass tracks and is to connect the growing city of science Adlershof with the Schöneweide transport hub from September 2021.

The new route will extend tram lines 61 and 63 from its current terminus in Karl-Ziegler-Strasse in Adlershof via Groß-Berliner Damm to Schöneweide S-Bahn and the M17 tangent line in the other direction from Schöneweide to Adlershof. Five new stops with, passenger information systems and weather protection will be built along the route. The construction cost of the new line is around 40 million euros, or or 14.8 million euros per kilometre. Up to 12,700 passengers are expected on the new section every day, which is why the trams will operate every 5 minutes during rush hour.

The Adlershof business and science city

The district of Adlershof in the southeast of Berlin belongs to the Treptow-Köpenick district and is a historically grown science location. Already the 1930s the so-called Wind Tunnel has been installed here. Then, in the times of the GDR, the former Academy of Sciences was located in Adlershof as well. The City of Science, Economy and Media (WISTA) has then been further developed in Adlershof since the late 1990s. Among other institutions, there are now over 564 companies and non-university research institutes located in technology fields in the Adlershof Technology Park, including several institutes of the Humboldt University and the German Aerospace Center (DLR). In addition to the scientific and commercial facilities, numerous apartments were also built. By 2015, a residential area for up to 8,000 residents and student apartments were added to the scientific park.

In order to better connect the development area to the Adlershof S-Bahn station, tram lines 61 and 63 were extended in September 2011 to the current terminus Karl-Ziegler Strasse, which was completely built as “right-of-way” and partly with modern grass tracks. At that time the tram ended in a “no man’s land”. Today, the turning loop is surrounded by houses, trees and offices.

With the new extension of the tram route from Karl-Ziegler-Strasse in Adlershof to the Schöneweide S-Bahn station, a new cross-connection is created between two important junctions in the southeast of Berlin. After some first assessments in 2015, the design planning was carried out in 2016. The planning approval process was carried out in 2018 including the public consultation phase. In 2019, the planning documents were revised, the execution planning finalised and the preparation of the construction tender took place.

The planning approval decision has been given on 7 February 2020. Shortly thereafter, on April 20, the order was placed with STRABAG as the construction company. The residents were informed about the construction work at the end of April via an online resident information event with 215 participants.

Politicians and the operator BVG are very happy about the new construction project. The last time a tram extension went into operation in Berlin was in 2015 with the extension from Nordbahnhof to the central station.

Regine Günther, Senator for the Environment, Transport and Climate Protection: “Over the past three years, together with the BVG, we were speeding up the planning process so that we can start building today. This is an important milestone in connecting the Adlershof science city to the Schöneweide transport hub. Berlin’s trams will become an increasingly important part of the mobility transition in the future.”

Dr. Rolf Erfurt, BVG Operations Director added: “The Adlershof science location is not only one of the leading technology parks in Europe, but is also developing into one of the most exciting places to live. With the new route, we ensure that the growing location is mobile in good time. Of course, all residents will also benefit from the environmentally friendly connection.”

Oliver Igel, Mayor of Treptow-Köpenick: “Today’s groundbreaking is an important step towards increasing the quality of life, especially in the Adlershof and Johannisthal districts. With this important infrastructure measure in the Treptow-Köpenick district, new and important traffic routes are being opened up for the growing residential areas and for the business locations of the science city of Adlershof.”

Mr. Samisch, who has been responsible for infrastructure projects at BVG for over 30 years, explained the technical details and special features of the construction work, which will take a total of one and a half years. The construction work can be divided into two large construction areas. One is located at the northern end of the new line on Sterndamm, where the new line is being pulled out from the existing tram line 60. Due to the complexity and high traffic density at this busy intersection, there will be many temporary measures during the construction period. Tram line 60 will be replaced by buses for a whole year starting on 8 June 2020. Thanks to the fact that the alignment is open, Samisch assumes that the first rails can already be laid in the second half of June this year. A section of the tram track will be built as a bus lane.

Due to the complexity and high traffic density at this busy intersection, there will be many temporary measures during the construction period. Tram line 60 will be replaced by buses for a whole year starting on 8 June 2020. Thanks to the fact that the alignment is open, Samisch assumes that the first rails can already be laid in the second half of June this year.

The new line continues southwards in its right-of-way alignment along the Sterndamm and the Groß-Berliner Damm to today’s loop Karl-Ziegler Straße, which will be removed. This construction phase is therefore the second major construction phase. A new substation and a total of five new stops are being built along the route.

The planners have also come up with a groundbreaking concept in terms of noise protection in order to keep the effects for the residents as tolerable as possible. Large construction machines can only work a maximum of eight hours a day. Noise levels and vibrations are measured regularly and transmitted to the planning approval authority. Fines can even be imposed if they are exceeded.

The new tram will also be extremely quiet once it will be operating. This is ensured on the one hand by the embedded grass track, which, according to Samisch, causes 3 dB less noise than comparable ballasted tracks. On the other hand, all curves smaller than 200 m are equipped with a rail head conditioning system, or lubrication system. This is to prevent squeaking in the curves. In addition, all houses of the residents, if not yet equipped, will be provided with soundproof windows.

The Adlershof II tram line is one of several new tram lines that Berlin’s Senate and the BVG are committed to for the current legislative period. The planning for the other routes is progressing, but these will not be completed by 2021. This concerns the reconstruction of the tram route at Ostkreuz train station and the expansion of tram line 21, the relocation of the terminus at Mahlsdorf S-Bahn station (line 62) and the extension of the route between the main train station and Turmstrasse metro station.