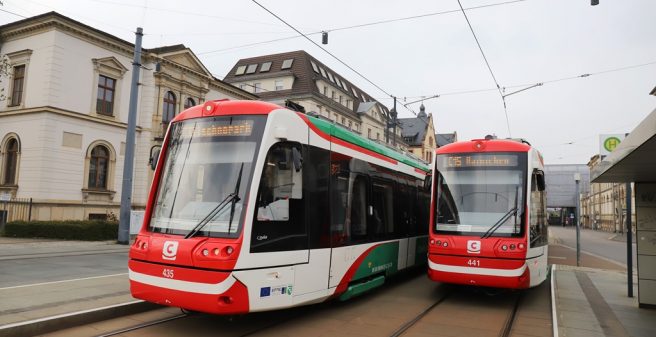 The construction of the Tram Train railway line of the Chemnitz model to Aue is to begin in the upcoming weeks. After the Federal Railway Authority (EBA) issued the approval in the beginning of July 2019, the preparatory work for the construction site is currently underway. The new tram train route is around 47 kilometers long and will use the existing railway alignment to Aue in the south-west of Chemnitz in Saxonia while connecting to the existing tram network near the University campus.

The new tram train line will be connected to the existing tram network via the new 2.2 km tram line to University campus/ Technogiepark which opened in December 2017 already. It is currently operated by CityBahn lines C13, C14 and C15 as well as by tram line 3.

The link to the railway line to Aue will be implemented at the existing terminus loop at the technology park next the university. The contract for the construction work was awarded by the land transport authority VMS on 29 July 2019 to STRABAG Rail GmbH and STRABAG AG. Currently STRABAG RAIL is preparing the construction phase. This includes the preparation of the construction site facilities, procurement of materials (for example, the ordering of new rails) as well as the preparation of a documentation of the construction site. The official launch of the construction site is planned for mid-september. The (re-)opening of the route to Aue as a tram train line will take place at the end of 2020. The diesel-electric dual-system Stadler Citylink tram trains will then be operated on the line. The total infrastructure cost amounts to 65 million EUR. The project also includes four public transport connections with bus connections as well as park and ride facilities.

Today a total of four lines are operated, with which passengers can commute from the city centre of Chemnitz without the need to inter-change to the neighboring cities of Stollberg, Burgstädt, Mittweida and Hainichen in the district of central Saxony. According to VMS, the tram train network is now connecting a total agglomeration of 800,000 people, thus increasing the attractiveness of rural areas and improving the quality of public transport.

The first pilot line to Stollberg / Erzgebirge started operation in 2002. The railway line has been fitted with 750 V DC catenary, operated with adapted Variobahn/ Variotram low-floor trams. The tram train network is labelled “CityBahn”. On line C11 (formerly 522) to Stollberg, six Variobahn/ Variotrams NGT6-LDZ (No. 411-416) are operated today. These vehicles are equipped with adapted wheel profiles, allowing for operation on both tram and railway tracks, train control (PZB I60R) and train radio. Compared to the 24 urban Variotrams which are designed for 70 km/h, the “regional” Variotrams reach a maximum speed of 80 km/h.

In 2016, a new connection between the tram and the railway network went into operation in Chemnitz Hauptbahnhof (central station). Since then, the CityBahn operates to Burgstädt, Mittweida and Hainichen as part of the first stage of expansion. On the new lines C13, C14 and C15, a total of 12 Citylink tram trains vehicles built by Vossloh Kiepe GmbH and Vossloh España S. A. (today Stadler Valencia) are operated. The three-car 37 m long tram trains are dual-system tram trains. On the lines electrified with 750 V DC the vehicles are operated electrically via pantograph while on the non-electrified railway lines, a roof-mounted diesel-generator provides the electricity. The maximum speed is 100 km/h.

Following the connection of Stollberg (stage 0) in 2002, Burgstädt, Mittweida, Hainichen (stage 1) and from 2020 Aue (stage 2), the VMS will connect the city of Oelsnitz / Erzgebirge (stage 5) from Stollberg to the tram train network. Start of construction is planned in 2020. The planning phase pf stage 4 for the route to Limbach-Oberfrohna will start in 2020. Stage 3 to Cranzahl and Olbernhau will follow later.

At present, the Chemnitz tram train network has a length of 89 km. When the final stage is completed, the network will have grown to a length of 278 km. So far, the Chemnitz tram train network has been very well received by the population. On the route to Stollberg, ridership has grown by 886 % between 1998 and 2008. This makes the tram train route to one of the most successful regional train lines in Germany. Passenger numbers continue to develop positively across the entire network. In 2018, over 3 million passengers were carried on the tram and regional tram network.