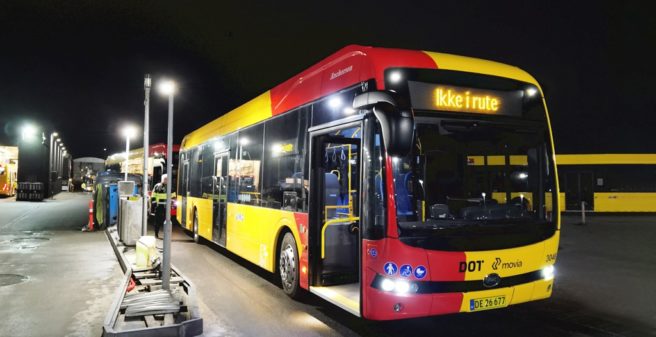 The operator Anchersen based in the Danish city of Hvidovre, is converting to electric buses on a large scale for urban transport in Copenhagen. 25 MAN Lion’s City 12 E now followed by 21 battery buses of the Chinese manufacturer BYD with a length of 13 metres. Hvidovre is a neighbouring city of Copenhagen with a population of around 51,000.

In Denmark, the system of tendering for regular transport services is even more wide-spread than in Germany, for example. Companies interested in providing the services in question can submit an offer. The party ordering the services awards the service to a company on the basis of the bids received. And this is not only the case with buses, but also with railways.

For this purpose, “transport companies” have been founded in Denmark. Their task is to define the services, put them out to tender, coordinate them and supervise their operation. This “transport company” in Copenhagen (and the surrounding area) is MOVIA – the name is a combination of the Latin word “movere” (to move) and the Latin “via” (way). And MOVIA has also contracted out services in Copenhagen city transport to Anchersen. Anchersen is organised as a public limited company (Danish abbreviation “A/S”).

For Copenhagen’s line 7A, MOVIA awarded the contract to Anchersen, and since February, 25 MAN Lion’s City 12 E buses with a length of about 12 metres have been on the road here. Anchersen mentions on its homepage that they are the first buses built in Germany on this line.

Anchersen‘s new electric buses which just have started service for MOVIA come from a Chinese manufacturer, BYD. They are 13 metres long and have three doors. Their door arrangement is not unusual for Denmark: double-width doors at the front and in the middle of the vehicle, and a narrow door at the rear (formula 2-2-1).

BYD is originally a company in the electrical industry that recognised early on that transport in the future would have to be (at least very substantially) electric. So they got into building electrically powered road vehicles; after all, they had mastered the electric part since time immemorial. They offered – and still offer – cars, vans, trucks and, of course, buses. BYD builds its own batteries, and was the first manufacturer ever to use lithium iron phosphate batteries.

The external design of the new BYD battery buses is very similar to what we are used to here in Europe. Older BYD buses looked a bit more exotic. BYD had already delivered electric buses to the greater Copenhagen area in the recent past. By the end of the year, 35 Ebusco 2.2s ordered by Nobina are also expected here, among others.