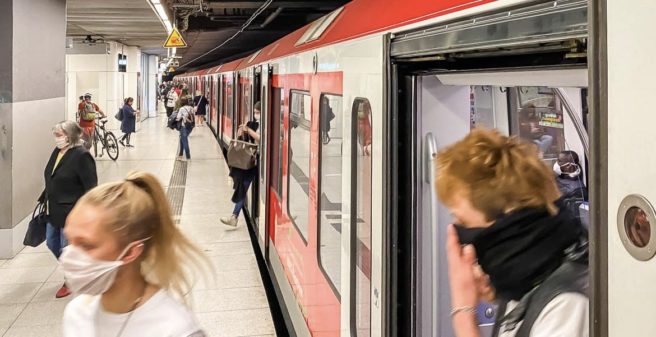 For a long time, the public transport industry claimed that it was safe to travel in its vehicles even during times of Corona. In the meantime, more and more cities and countries seem to be questioning this and reacting with warnings, blocked seats, access controls and even bans on speaking. Yesterday (19 January 2021), the German government also tightened the Corona measures and decided that medical masks (OP masks or the even more effective FF2 masks) must be worn in public transport with immediate effect. In addition, the number of passengers is to be reduced, especially during peak hours, by closing schools and kindergartens and introducing home offices as far as possible, provided that this is possible in the companies. In this way, the federal and state governments wish to prevent the further infection of new Covid-19 mutations in particular. Transport companies are now also sending their administrators into the home office.

For months, the operators of trains and buses in Germany have been asserting that their vehicles are not Corona drivers. As recently as last autumn, when the infection figures in Germany were rising sharply, the Association of German Transport Companies (VDV) claimed in a large-scale image campaign: “Even in times of Corona, there are many good reasons to get back on buses and trains and, objectively speaking, there is no cause for concern.”

A few weeks ago, Deutsche Bahn presented a study that was supposed to prove that travelling by train was safe (however, it subsequently had to put up with the accusation of journalists that it had made dubious statements and had worked in a methodologically unsound manner. Shortly before Christmas, the Hamburg transport authority also emphasised that its own means of transport were “actually relatively safe”.

Are buses and trains not so safe against Corona after all?

But in view of the unchanged high Corona infection figures in Germany and most European countries, the mood is now changing. More and more cities and countries are reacting with warnings, blocked seats, access controls and even bans on speaking on public transport. We summarise the most recent examples from Germany and abroad.

Nationwide, the Free State of Saxony most clearly contradicts the assumption that public transport is infection-proof. In view of the high Corona infection figures, the Saxon government has urgently advised that only absolutely necessary journeys be made by public transport in order to reduce the load to a minimum. According to a report in the newspaper FAZ, the Free State wants to reduce the average load factor in public transport from the current 40 per cent to only 25 per cent and hopes that the warning now issued will lead to this goal.

For comparison: in the HVV in Hamburg, passenger numbers are currently around 50 percent compared to pre-Corona levels. In the Hanseatic city, there are no such political warnings so far. However, the number of new infections in the Hanseatic city is also significantly lower than in Saxony.

Meanwhile, Andreas Knie, a transport researcher from Berlin, expects the number of passengers on trains and buses to continue to decline significantly throughout Germany. “Only the lower income groups are still sitting in the trains,” he told the FAZ. “Those who have an alternative will use it.”

In Bavaria, meanwhile, the cabinet passed a resolution yesterday that also calls into question the previously claimed Corona safety in public transport. As of next Monday, only FFP2 masks may be worn in all trains and buses throughout the state. Minister President Markus Söder (CSU) said that the “normal community masks” were for the protection of others in the Corona pandemic. FFP2 masks also protect the wearer. The aim, he said, is to improve safety in public transport. A step that will not necessarily make the use of Bavarian public transport more attractive and will probably further reduce passenger numbers.

More on the topic (in German):

Saxony, too, is now thinking about making FFP2 masks compulsory in local public transport. In Lower Saxony, however, such a requirement is not an issue, as RTL reported yesterday. Nor have such ideas been heard from Hamburg (yet). “An FFP2 wearing obligation is currently not on the agenda,” HVV press spokesman Rainer Vohl explained in response to a NAHVERKEHR HAMBURG enquiry.

In Berlin, meanwhile, the municipal transport company BVG is being accused by concerned employees of not doing enough for their safety. According to a report in the Berliner Zeitung, they are demanding more efforts from their employer to prevent infections. One of the demands mentioned there is, for example, that in trams the driver’s area must be disinfected every time there is a change of personnel. This would not happen in many cases. In addition, he said, there are still shift schedules that provide for drivers:inside to change their rolling workplaces several times. “Such shifts should be minimised,” he said.

A fortnight ago, BVG had to record its first Corona death in its own ranks. A 49-year-old tram driver died of the virus. According to the transport company, the man was not infected at work but at home.

Abroad, too, there are more and more examples that cast doubt on Corona infection safety in public transport and go far beyond the measures in force in Hamburg.

Denmark, for example, has significantly tightened safety measures in public transport. The transport companies have been ordered by the responsible ministry to take only so many passengers on trains and buses that a distance of at least two metres between passengers can be maintained. Accordingly, the means of transport should in no case be more than half full. Citizens were urged to travel outside rush hour or, alternatively, to cycle and walk.

In the British capital London, the municipal transport authority also advises against travelling by trains and buses during rush hours and refers to cycling as an alternative there as well.

And in the Australian metropolis of Sydney, the seating and standing capacities in underground trains, trams, suburban trains, regional trains and ferries have also been drastically reduced to one sixth of the maximum vehicle capacity. Access controls in the stations ensure that not too many people crowd into the vehicles at once.

Meanwhile, the Spanish holiday island of Majorca, which also suffers from high numbers of corona cases, is taking a completely different approach to protection against corona. As of today, passengers are no longer allowed to talk in trains and buses – for safety reasons.

This article was first published by our cooperation partner NahverkehrHAMBURG.de. You can read more mobility news from the greater Hamburg area here: https://www.nahverkehrhamburg.de