Davos of Transport met in Leipzig – the exclusive summary 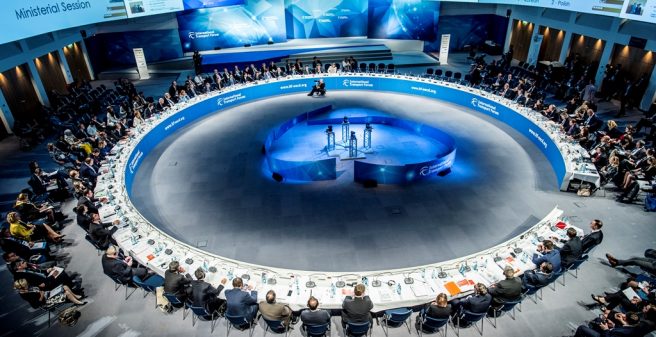 Often called the Davos of the International Transport Community, ITF in Leipzig, has established itself as an important political voice in the worldwide transport politics and strategies.

Over 1,000 participants from more than 70 countries took part in this year’s ITF in Leipzig, Germany, from May 22 to May 24. The objective of the forum is to discuss, exchange and define the challenges and future transport policies. Among the participants are transport ministers, government workers, strategists, transport planners as well as the transport industry.

“It’s the largest meeting of transport ministers in the world,” said Young Tae Kim, the forum’s Secretary-General, at the opening press conference of “Transport Connectivity for Regional Integration.”

The International Transport Forum has been founded in 1953 (as the European Conference of Ministers of Transport, ECMT) and is part of the OECD (Organization for Economic Cooperation and Development), based in Paris and has currently 60 member countries. On May 23 2019 Tunisia joined the ITF and is therefore the newest member of the organisation. “Tunisia aspires to become a regional economic hub and a Mediterranean centre for trade and services,” said Hichem Ben Ahmed, Tunisia’s Minister of Transport.

During this years’ summit, the ITF launched a common Ministerial Declaration on Transport Connectivity for Regional Integration. The ministers responsible for transport in the member countries of the International Transport Forum, declared that that “safe, secure, economically-efficient, and well-connected transport plays an important role in facilitating individual mobility and trade flows, both of which are essential for the sustainable development of regions”.

The ITF is also the occasion to launch the yearly Transport outlook which is probably the most complete analysis for all transport modes worldwide. According to the analysis, “global demand for transport will continue to grow dramatically over the next three decades. But potential disruptions from within and without could significantly change the transport sector. Passenger transport will increase nearly three-fold to 2050, from 44 trillion to 122 trillion passenger-kilometres.”

Furthermore, several recent topics such as algorithms in the transport sector have been discussed. It is a clear message than policy makers must become algorithmically literate. This is the key message of a new report by the International Transport Forum which has been presented at the ITF. It has been discussed that automated decision-making is becoming more and more common. “Choices that used to be made by humans are instead entrusted to algorithms and based on Artificial Intelligence (AI). Transport is one of the areas where algorithms play an increasing role, for instance in automated driving or new mobility services.” The interesting question will therefore be for future policies on how algorithms and Articifial Intelligence will be reflected in legal, regulatory and ethical frameworks.

As part of the event, “Noah’s Train” has been presented on May 22 in Leizpig Hauptbahnhof, Leipzig’s central station. The train is a freight train with painted containers, showing pictures of animal and nature – the work has been done by artists. The train has been launched in Katowice, Poland, in December 2018 during the world climate conference and has been touring through europe since. Referring to the biblical name “Noah’s ark”, the european rail freight operators want highlight their engagement in the action against climate change and ask for more support in the shift from road to rail.

Further information on the ITF can be found on the official website: https://2019.itf-oecd.org/