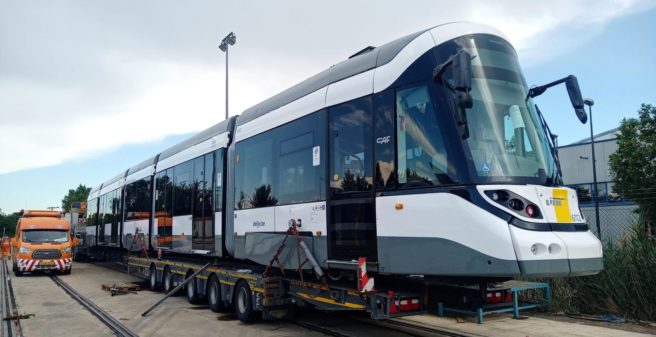 The first brand new CAF „Urbos 100“ tram for Belgium’s famous Coastal Tram has just arrived at its new home: After a 1,700 km trip on a RoRo wessels it was off-loaded at the port of Zeebrugge and finally arrived at the operator De Lijn’s depot in Oostende.

The vehicle is the first of a series of 48 single-ended tramways which will replace the 35+ years old fleet on the 70 km long, metre-gauge tramway line along the entire coast line of the country between Knokke and De Panne-Adinkerke. 14 more trams might be ordered at a later stage – to cover additonal passenger demand and an extension of the line to Veurne in the future. The order is part of a framework agreement signed with Spanish CAF group for the supply of up 146 five-section, metre-gauge tramcars for the Coastal Tram (Flemish: „Kusttram“) and the city tramway systems in Antwerp (Antwerpen) and Gent. 66 single-ended tramways are forseen for the city of Antwerp – 23 of them are already on firm order – while 18 bi-directional tramways would go to Gent.

Test rides of the new low-floor tram are soon to be started, passenger service is expected in a few months time. Delivery of the remaining 47 CAF Kusttram vehicles should be completed by 2021. The 46 older tramcars of the Kusttram will gradually be taken out of service and probably scrapped.