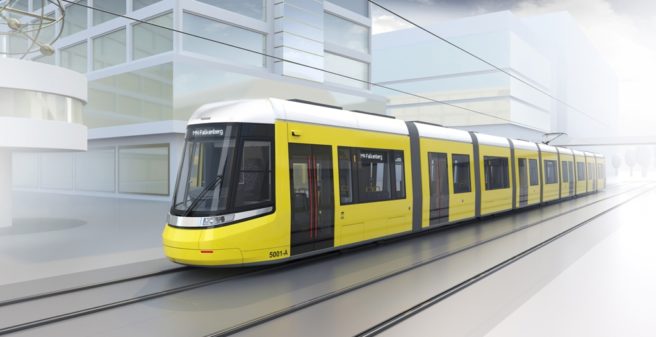 Berliner Verkehrsbetriebe (BVG) and the manufacturer Bombardier Transportation (member of the Alstom Group since 29 January 2021) revealed the design of the capital‘s new tramways. The design is easily recognisable as it is derived from the award-winning Bauhaus design of the already existing fleet. However, it also sets its own refreshing accents.

The front with the large, pulpit-like window has a striking effect and at the same time ensures good all-round visibility. The large side windows also offer passengers a good view of the city. The colour scheme remains in the unmistakable yellow with the white roof bonnet typical for BVG trams.

“Now that essential details of the new design are clarified, we can lift the secret,” said BVG Chief Operating Officer Dr. Rolf Erfurt. “Our new models are unmistakably members of the Berlin tram family and yet have their own special features. With a fresh design and contemporary features, the new vehicles – just like their predecessors in over 150 years of Berlin tram history – will shape the image of our city. We hope that our passengers will like the trains as much as we do.”

“It’s hard to see, but the bogies have also been given a new design. This means that they will ensure that the boarding height for passengers will be lower and that the trams will roll through the city more quietly than before,” emphasised Müslüm Yakisan, President Alstom, DACH Region.

A framework agreement concluded in December 2020 guarantees the delivery of up to 117 new bi-directional vehicles for BVG’s aging tram fleet. We reported here about the topic: https://www.urban-transport-magazine.com/en/bombardier-to-supply-up-to-117-new-trams-for-bvg-berlin/ The contract comprises models of two vehicle lengths, 30 and 50 metres, made up of five or nine modules respectively. The 50-metre trains are celebrating their Berlin premiere. With the significantly increased space available, BVG is also demonstrating that trams in Berlin are clearly on route for growth.

The minimum contract volume amounts to approximatley 350 million euros. In addition, a spare parts supply contract with the manufacturer and a maturity of more than 30 years was also signed. The first firm order-lot comprises 17 nine-unit and 3 five-unit trams for delivery at the end of 2022. Further deliveries under the framework agreement are scheduled until the year 2033. The 50-metre versions will be used on the M4 line, which is in particularly high demand and where GT6 vehicles are currently running in double traction. The 30-metre versions will replace the previous GT6s, mainly in south-eastern Berlin.

WHY can’t the passengers ALSO enjoy the front large ‘pulpit-like’ windows as well! Seems to be this modern trend of blamking out the front end view on ALL forms of passenger railway rolling stock!. The oulder trams had seeing capability for the public, Even a lightly tinted witndow between the passenger cabin and the Führerstand and the paying public would have been accpeible! This is an assault on railway enthusiastes not being able to see out the front end! This causes me to lose interest in Berlin as the U and S Bahns for decades have no windows for the public to see out, now even the front end, of the trams as well?

VERY disappointed, one would think that at least the trams would have windowed access out the ends as well! This is old school mentality despite the older trams having even clear windows for the passengers to see out the front over the driver’s shoulder!
I am NOT moving to Berlin now! Too disappointed!