Düsseldorf: One year of Metrobus operation 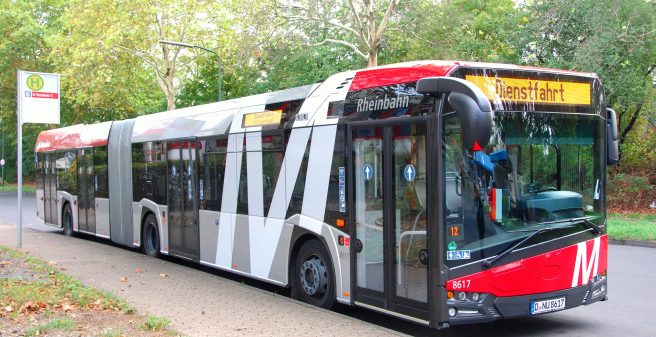 
Rheinbahn Düsseldorf started a new service offering on 12 September 2018 – just one year ago. In addtion to the existing light rail and bus routes the operator opened the new „Metrobus“ services. Metrobus is characterised by several Bus Rapid Transit-type features such as separate bus lanes and branding. The following routes are in operation:

All routes connect to light rial, bus and suburban train routes at certain stops. The Metrobuses offer a faster and more attractive way of public transport and release pressure on other bus routes especially during peak hours. The lines use newly created bus lanes lanes separated from the rest of the road traffic.

Rheinbahn purchased 19 new articulated Solaris Urbino 18 numbered 8601 to 8619. They wear a special livery and are equippped with leather seats in the interior not only for more comfortable ride but which are also easier to maintain, as per Rheinbahn sources.

With 2.9 million passengers during the first year of operation the new Metrobus concept clearly is a success story.