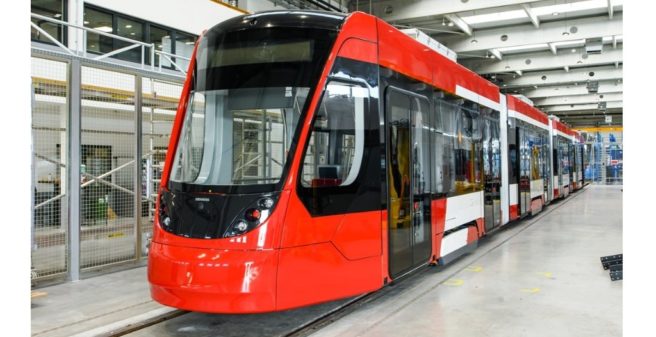 A week ago, Nuremberg’s first new Avenio tram arrived at the Siemens test centre in Wegberg-Wildenrath in Western Germany. Here it will undergo its first dynamic tests in the next few weeks. They are part of the commissioning and approval process.

Construction of the first vehicle began almost a year ago at the Siemens plant in Serbia, where trams are also built for the public transport operators in Munich and Bremen. Currently, three more trains for VAG Verkehrs-Aktiengesellschaft Nürnberg are already under construction there in various stages. “More time always has to be spent for the first vehicle than for the subsequent ones. There is a need for coordination during the production process. Corona made this difficult for us, because normally we would have been on site more often to monitor the construction. But Siemens and we solved the task”, reports Johannes Wendland, VAG project manager. As early as January 2022, the second tram will be brought to Wegberg-Wildenrath on a low-loader, and according to current plans, the third will come directly to Nuremberg in February, says Wendland. VAG’s initial order includes twelve Avenio tramcars. These are expected to gradually enter passenger service from summer 2022 and will serve in particular to increase services on lines that are already in high demand. From 2023, they will also run on the two new lines 10 (Am Wegfeld – Plärrer – Aufseßplatz – Dutzendteich) and 11 (Gibitzenhof – Aufseßplatz – Hauptbahnhof – Mögeldorf). These are included in the Nahverkehrsentwicklungsplan – Local Transport Development Plan (NVEP), as is an extension of line 7 to Stadtpark and from Tristanstraße to Bauernfeindstraße, as well as the prolongation of line 4 from Gibitzenhof to Worzelsdorfer Straße.

In addition, the order placed with Siemens includes six further options for an additional 75 vehicles, which are expected to be commissioned by 2035.

The Avenio is a proven low-floor vehicle that allows step-free access. The interior of the vehicle is also step-free, only the seats above the wheels are placed higher. The Avenio consists of four modules, each with its own centrally located bogie. So-called multifunctional areas are arranged in the access area of the eight double doors, offering more space for speedy boarding and alighting, but also sufficient parking space for prams, rollators and wheelchairs, as well as for bicycles during off-peak hours. As with the G1 metro cars supplied by Siemens Mobility, LED strips are installed along the doors of the Avenio, which signal to passengers with green or red whether they can board. In addition, the trains will be equipped with air conditioning and WLAN all year round.

Thanks to the large number of units, VAG also got an attractive price for the basic order. The first twelve trams cost approximately 44 million euros. The State of Bavaria is subsidising their procurement with about 40 percent of the eligible acquisition costs, in total approximately 14 million euros. The funding comes from various sources, namely the Municipal Transport Financing Act and the package of measures for air pollution control of the State of Bavaria. Among other things, this is intended to support the transport companies in renewing or strengthening their vehicle fleets in order to encourage even more people to switch to public transport. Here, public transport is considered an essential factor for the environment and climate.

MVG Munich reports the delivery of the first of 73 additional four-car Avenio trams ordered from Siemens Mobility under an agreed option. (Our report: https://www.urban-transport-magazine.com/en/73-new-siemens-avenio-trams-for-munich/ ). Of the total of 73 new vehicles under the option, which will be delivered by 2026, 24 vehicles are foreseen to replace old trams, while the other 49 are additions for the expansion of the service and future new lines.