E-bus in Paris: framework agreements and signed contracts – including a first major contract for Irizar 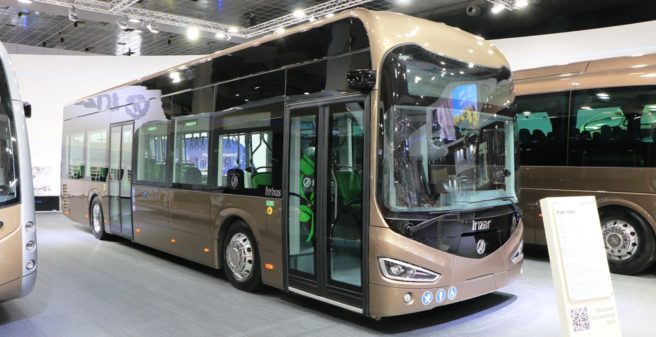 After a first large tender two years ago, which had been awarded to Alstom, Bluebus (Bolloré Group) and Heuliez, RATP in Paris (Régie Autonome des Transports Parisiens) signed framework contracts with the five manufacturers Irizar, Solaris, Bluebus, Iveco and MAN a few months ago. Now the first orders have gone to Irizar (113 cars), Bluebus (158) and Iveco (180).

Irizar e-mobility signed the supply contract for the 113 e-buses of its new model generation of the “ie bus” which will be delivered in 2022 and 2023. The 12 metre long vehicles are equipped with 350 kWh Irizar batteries and they will be slow charged in the depot. The electronics, communications and other main components and systems on the buses use technology from the Irizar Group, which has been a pioneer in providing electromobility solutions with a holistic vision for cities.

Irizar e-mobility will have an after sales service in Paris managed by expert technicians and people hired locally, which will in turn help generate local wealth and employment.

The procurement is part of the RATP Bus2025 programme, which is financed by Île-de-France Mobilités and additional EU funds and aims to replace all buses of the operator RATP with vehicles powered by electricity or bio/natural gas by 2025. With this plan, the RATP’s carbon footprint will be reduced by 50% (2015 reference*). RATP will help to achieve Paris Metropolitan Region’s ambitious climate targets.

Irizar is staying firmly committed to the French market. In 2016, they put the first 100% electric line into operation in Marseille with six Irizar electric buses. That city has once again put their trust in Irizar to renew their fleet of buses. Three years later the ambitious Amiens project arrived, which was the largest ultra-fast charging electric bus fleet in Europe. That same year Irizar put two more BRT projects into operation in Aix-en-Provence and Bayonne. The most recent contracts closed have been the orders for Orleans and Strasbourg.

“We’re very thankful to the RATP for the trust they’ve placed in us to renew their fleet of buses. Being able to implement our electromobility solutions in a city like Paris, which is a world leader in electromobility, is a major challenge and we couldn’t be more proud. Without a doubt it’s a very ambitious project that represents a big step forward in our position in the French market. And it reaffirms our strategy of providing solutions and turn-key services for sustainable, efficient, intelligent, accessible, safe and connected mass transit.”  says General Director of Irizar e-mobility Imanol Rego.