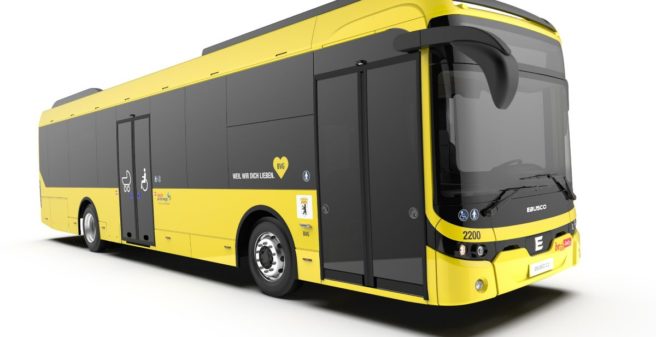 Ebusco, a pioneer and frontrunner in the development of electric buses and charging systems, has signed a contract with Berliner Verkehrsbetriebe (“BVG”) for 90 Ebusco 2.2 buses for the city of Berlin. This contract expands Ebusco’s presence in the strategically important German market. The delivery of the 90 Ebusco 2.2 buses to BVG is scheduled for 2022.

BVG is Germany’s biggest public transport operator and is committed to transform its entire bus fleet to electric buses by 2030. The order of 90 Ebusco 2.2. buses will bring its electric bus fleet to 228 buses. Furthermore, the contract includes an option to order another 60 Ebusco 2.2 buses until one year after the delivery of the first bus.

Ebusco is active in the German market since 2017, and already has buses in operation in German major cities, including Munich, Bonn and Frankfurt. With this contract, Ebusco expands its presence to another major city in Germany, one of Ebusco’s key target markets, having 54 buses on the German roads.

Peter Bijvelds, CEO of Ebusco comments: “We are delighted to welcome BVG as our client and to be selected  to contribute to BVG’s transition to an entirely zero-emission bus fleet. As the largest public transport operator, BVG plays a pioneering role in transitioning the German public transport market to climate neutral solutions. We are proud that BVG has chosen for Ebusco and we are looking forward to establish a solid relationship.”

The high and consistent battery performance in combination with the competitive TCO were important considerations for BVG for choosing Ebusco.