Electric bus towns for the UK 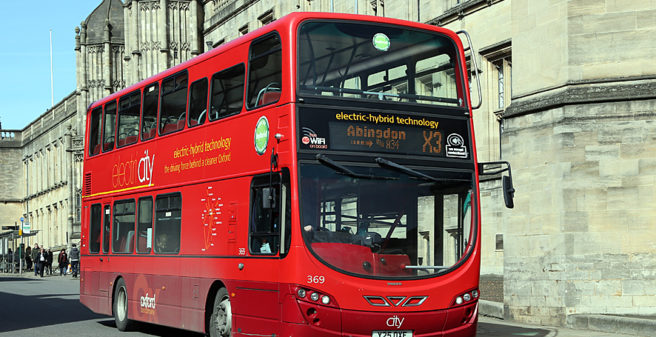 In February 2020, the UK Government announced plans to invest £ 5 billion (ca 5.65 billion Euro) in a new ‘golden era’ for buses. One innovative feature of the plans was the opportunity for towns and cities to compete to become the first in England with an all-electric bus network.

19 local authorities submitted entries and on 6 January this year, Coventry and Oxford were announced as the cities shortlisted to develop a business case to switch the entire city’s bus fleet to electric. Subject to successful business cases, each area could be awarded up to £50 million to not only replace its entire fleet of buses with all-electric versions, but to also install new infrastructure, such as charging stations, and to pay for electric grid updates.

Both cities currently have comprehensive multi-operator bus networks but with significant differences in their historical development, particularly where electrification is concerned.

City transport in Coventry was a municipal responsibility until 1974 when the bus fleet was absorbed into the West Midlands PTE. Buses had replaced the last of the city’s once extensive 1067mm gauge electric tram network in 1941. The privatised successor to the PTE is National Express Coventry which introduced ten BYD/ADL Enviro 400EV electric double-deckers to the city in 2020. National Express has already committed to not buying any more new diesel vehicles.

Stagecoach is the second most significant operator in Coventry with an emphasis on serving the towns immediately beyond the city’s boundaries. Until closing down in 2020, local operator Travel DeCourcey had also provided a number of significant services in the city including for several years a dedicated Park and Ride shuttle. From 2012 until 2014 (when the dedicated service ceased), this was operated by three Optare Versa EVs with in-day charging facilities at the car park terminus. In a separate project, Coventry is developing plans for a very light rail system linking key city locations.

Electric power has played a relatively minor role in Oxford’s public transport so far. The city’s company operated horse tram system was never electrified and buses replaced the trams in 1913. The successor company was nationalised in 1969 and, divided into two successor companies, was privatised in 1986. City services mainly passed to Oxford Bus Company which has been part of the Go-Ahead organisation since 1994. Services further afield became the responsibility of the South Midland company which soon introduced a competitive network of minibus services in the city itself. It eventually became part of the Stagecoach empire.