Electric buses on all trunk routes in Osnabrück 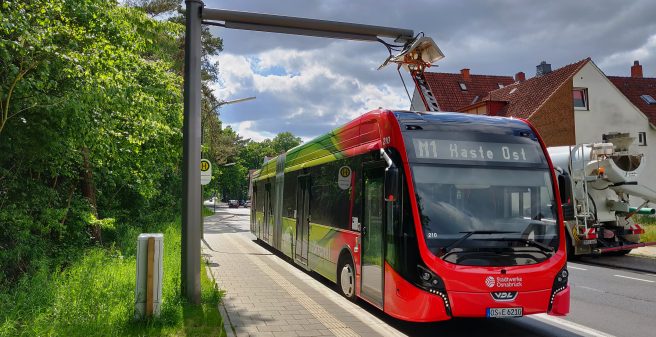 12 articulated VDL Citea SLFA-181 Electric provide all weekday services on trunk route M1 between Haste Ost and Düstrup, one further vehicles remains in the depot as reserve unit. The vehicles are charged at either end of the route via pantograph. Dutch company VDL Bus & Coach had signed a turn-key contract which included the fast chargers on the termini and 14 overnight charging stations for the main depot. Supplier of the entire charging equipment was the company Schaltbau.

The 13 new E-buses follow VDL’s „BRT-Design“ concept, are 18.1 m long and have a capacity of up to 133 passengers. Electric equipment including the 210 kW motor comes from Siemens.

Further plans on the table

Passengers like the new, quiet E-buses, however, for detailed technical and economic analysis two months of full operation looks like a very short period of time. Electrification of the 13 km long former diesel bus route 41, now “MetroBus” route M1, is only the first step of the far-reaching plans to covert also the other defined MetroBus routes (M2 to M5) by 2022. Another 49 E-buses will be purchased. Different technical option have be considered including battery-trolleybuses with IMC In-Motion-Charging and fuel-cell buses.

The entire project enjoys subsidies from regional and federal funds. New diesel buses were last ordered in 2012, anticipating the future conversion program. If everything goes right, all remaining bus routes should also be electrified by 2030.