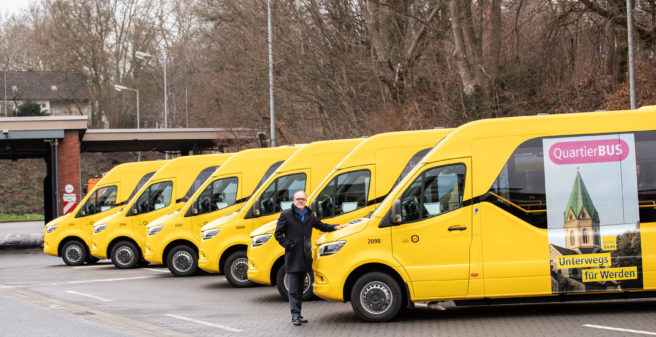 On 7 January 2021, three new “neighbourhood bus lines” (“Quartierbus”) were introduced in Essen for the first time in the history of the city’s public transport operated by minibuses. All three lines start at the Essen-Werden S-Bahn station. Lines 182 and 192 serve the districts of Werden, Heidhausen and Fischlaken, while line 190 connects the Ruhrlandklinik above Werden to the Werden S-Bahn station.

Five Mercedes-Benz 519 CDi Sprinter City 75 minibuses (numbered 2095 to 2099) had been ordered by Ruhrbahn – the municipal public transport company – and were built at Mercedes’ plant in Dortmund. They are 8,500 mm long and 2,100 mm wide and can carry up to 33 passengers, 14 of whom have a fixed seat. There are also five folding seats. Next to the wide door directly behind the front axle there is a 2,700 mm long, low-floor platform also for the use of wheelchairs and prams. To facilitate access to the vehicles, there is a fold-out ramp at this door.

The use of the minibuses makes it possible to operate on streets with tight curves not suitable for larger buses. Areas of the city can now be connected to public transport which previously had to be “left out” because of the limitations of full-scale buses.

In case of the new line 190 to Ruhrlandklinik the new minibuses can serve a much more direct route than the previous 12-metre-bus route, and subsequently travel time between Werden S-Bahn station and Ruhrlandklinik has been reduced to just 12 minutes.