ESWE Wiesbaden: Line 30 to Jagdschloss Platte – and the e-bus strategy 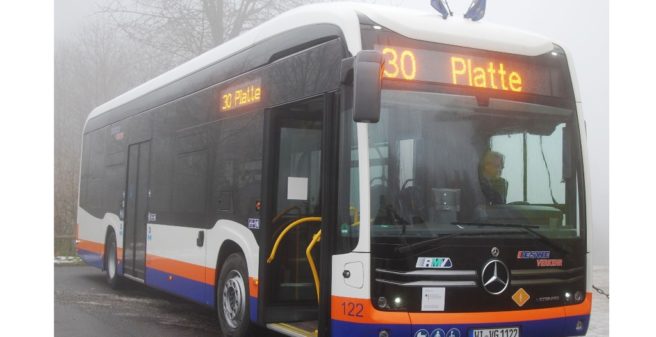 With the timetable change on 12 December 2021, ESWE Wiesbaden launched its Line 30 to Jagdschloss Platte in a new format – operating all days long. Jagdschloss Platte is a former hunting lodge and is located on the outermost edge of Wiesbaden on the Taunus Heights, just within Wiesbaden city limits and immediately adjacent to the neighbouring town of Taunusstein. The area around the hunting lodge is one of Wiesbaden’s favourite recreational areas.

On weekends when the weather is good, the forest around the “Platte” is literally overrun by excursionists. As was said on the opening trip of line 30 to the hunting lodge: “You should see what happens here at the weekend. The parking spaces are completely full down to the last parking space, and even though it’s forbidden, the cars are parked for miles along the federal road (B 417).”

So the expectation is clear: Wiesbaden’s citizens should please not take their own cars to drive to the “Platte” on weekends, especially on Sundays, but rather take the new regualr line 30.

From now on, line 30 will shuttle between the main station and the Platte hunting lodge from 8.27 a.m. (first departure from the main station) to 5.20 p.m. (last return to the main station). It will run every 60 minutes. In the city centre it serves almost every stop quite conscientiously, the further out it goes, the more it becomes a “fast bus line”. From the “Kesselbachstraße” stop, it only serves the “Unter den Eichen” stop at the far end of the enclosed Wiesbaden development, and from there it travels for eight minutes without stopping at all along the B 417 to the heights of the Taunus at the Platte hunting lodge. The timetable provides for a journey time of 20 minutes in each direction; together with a turnaround time at both terminus stations of a combined 20 minutes, this means that the line can be comfortably served by a single carriage.

Line 30 operates reliably every Sunday. On Saturdays, it is intended for use on days when there is snow on the heights of the Taunus. Then, however, it operates as on Sundays.

ESWE e-bus 122 was prepared for the journalists for the opening trip. It is a Mercedes-Benz eCitaro, only a few weeks old. It has solid-state batteries that give it a range of around 250 kilometres.

The fleet of Wiesbaden’s ESWE currently has 290 buses. 64 of them are already purely battery-electric buses. The first nine of them (101 to 109) date from 2019 and are equipped with batteries of an older generation (NMC = nickel-manganese-cobalt) with a range of 150 to 180 kilometres. The younger ones (cars 110 to 164) have solid batteries produced without pollutants with a range of around 250 kilometres. So battery technology is visibly making progress. These buses are primarily used on lines that do not go too far from the city centre. In particular, the nine oldest eCitaro should remain within reach of the depot …

In addition to the battery buses of the eCitaro type, Wiesbaden’s ESWE has also had ten hydrogen fuel cell buses of the Portuguese manufacturer Caetano of the “H 2 City Gold” type since autumn. They have, it was said on the demonstration trip to the Platte hunting lodge, a range of 400 kilometres.

They are not yet in regular service; they are only used to train drivers. “We have 700 drivers, it takes a while to train every driver on the hydrogen buses.” Because of their range, ESWE want to use the hydrogen buses more on those lines with long routes that take them to districts further out or even beyond the city limits. They will be in regular service from 20 December.

After all, this means that ESWE already has 74 electrically powered buses. That is remarkable: with a total fleet of 290 buses, every fourth ESWE bus is an electric bus: 74 x 4 = 292.

In addition, ESWE has Mercedes-Benz Sprinter City 75 minibuses which are either used as “nightliners” in night-time traffic or also as call-sharing taxis (AST) – mainly in the eastern suburbs of Wiesbaden.”