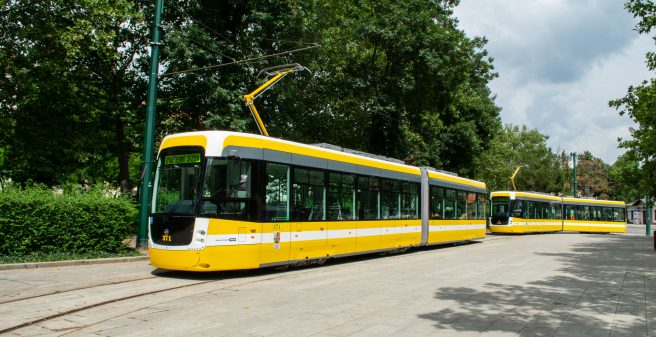 The new EVO2 trams in the depot | DPMP

The manufacturer consortium Pragoimex, VKV Praha and Krnovské opravny a strojírny, called the “Alliance TW Team”, built various low-floor trams of its “VarioLF” model on the basis of Tatra T3 components in recent years. It now also offers the completely redesigned models EVO 1 (four-axle vehicle) and EVO 2 (six-axle articulated vehicle). A prototype of the EVO2 is in Liberec already since 2012, but first production tramcars have only delivered now, seven years later, to Plzeň.

The local public transport operator Plzeňské městské dopravní podniky, as (PMDP) presented the first three vehicles on 8 August 2019, they started revenue service the following day the following day. They are numbered 369-377. The DPMP already has a larger number of the previous VarioLF models in its fleet, including four articulated vehicles.

The EVO 2 is a two-section low-floor tramway of 21.75m length and 2.56m width. It offers 47 seats and 92 standing capacity. Further orders for the EVO 2 are three tram cars for Most and up to out of a framework contract with the city of Brno.

Brand new trams in an older design keeps the nostalgy of generations long time very popular T3 model till further years..
EVO producer had been just reparing works – then they decided to build their own tram brand, its very good, very quiet and very cheap tram – comparing to other european non-Czech producers.
By now – the Czech republic has 4 active tram producers exporting around the globe.