First Bombardier HF6 for Düsseldorf homologated – will it become the successor of the legendary B-type? 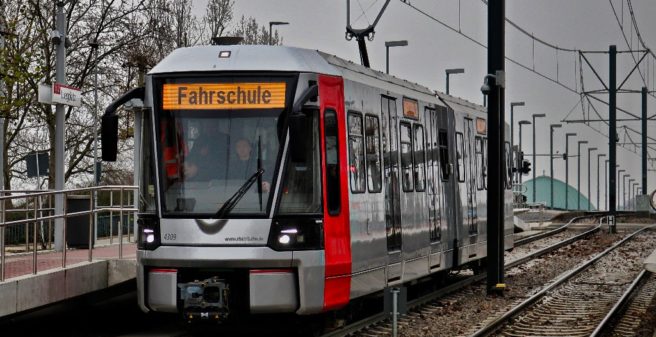 Rheinbahn's new HF6 vehicles are now approved for passenger service, however at this point in time the units are used for driver training I © Rheinbahn

The new six-axle HF6 high-floor light rail vehicle for Düsseldorf received approval for passenger operation from the technical supervisory authority at the beginning of May.

The operator Rheinbahn has ordered a total of 59 HF6 vehicles from Bombardier Transportation: 43 are to replace older GT8SU vehicles, and an additional 16 are planned to increase offers from 2020 on. Another 20 vehicles will be delivered to KVB Cologne. Delivery is also scheduled to begin this year.

Joint procurement for Düsseldorf and Cologne

While the Düsseldorf HF6 are vehicles with two driver’s cabs, the vehicles of the Cologne Transport Authority will only have one driver’s cab per vehicle, so that they can only be used as double traction. They will increase the fleet of existing high-floor light rail vehicles in Cologne.

The six-axle light rail vehicles have a length of 28 m and a width of 2.65 m. The car body consists of a welded steel structure. The empty weight is almost 40 tons. In the interior, there are 111 standing places and 64 seats. The top speed is 80 km / h. For use on the Düsseldorf and Cologne light rail network, the vehicles must meet both the rules of the BOStrab and the EBO.

Three light rail vehicles have already arrived in Düsseldorf. The company has been training its drivers with the new vehicle type since the beginning of the year. After the previous approval for the training company, the Technical Supervisory Authority (TAB) has now given approval for the passenger transport with the first vehicles.

Meanwhile, Düsseldorf is preparing another vehicle procurement. Last year, together with DVG Duisburg, the procurement of 109 high-floor railways was put out to tender. We reported here:

The question remains to be answered whether the HF6 could become the successor to the legendary B-car. Between 1973 and 1996, a total of 489 Type B light rail vehicles were built for eight German cities (or ten transport companies). The mechanical part was manufactured by Düwag. Various manufacturers supplied the electrical equipment. 30 to 40 years after the delivery of the firstnB-wagons, the question of the successor arises. The upcoming months might show whether the Bombardier HF6 has what it takes to make the “race” to be the successor. Vehicle tenders for B-car replacements are currently running in Düsseldorf and Duisburg as well as Essen and Mülheim. There is at least one competitor. The Leipzig-based manufacturer Heiterblick is already supplying 24 + 2 high-floor light rail vehicles (6-axle) with B-car specifications to Dortmund from 2021 and will modernize the existing 64 B80C high-floor light rail cars (43 6-axle and 21 8-axle).