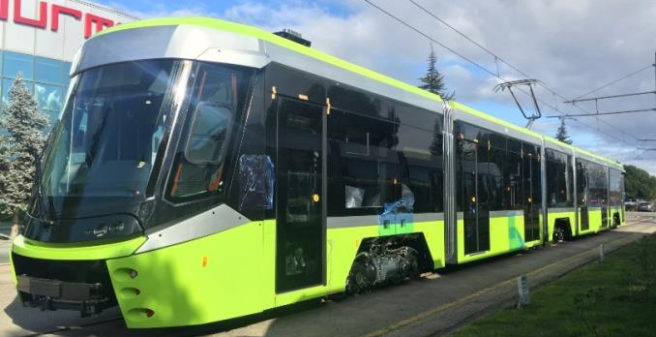 It is a first: the first Turkish tram for the Polish city of Olsztyn has been completed at the Turkish Durmazlar manufacturing plant and is expected in Olsztyn (Allenstein) in about three weeks time. The Turkish rail vehicle manufacturer Durmazlar and the Polish city of Olszytn signed a contract in August 2018 for the delivery of up to 24 low-floor trams worth EUR 20 million. 12 trams will be delivered until 2021 and there is an option for a further 12 vehicles.

12 trams for the tram extension

The new vehicles will be used on the future extension of the second tram line. The new Durmazlar trams have a width of 2.5 m wide and a length of 33 m and can transport 210 passengers, 40 of them seated.

The new generation has been branded “Panorama” and has already been delivered to the Turkish cities of Samsun and Kocaeli in 2016.

Already in 2010, the Turkish group founded Durmaray, which develops and produces rail vehicles. The first “silkworm” tram manufactured by Durmaray was delivered to Bursa, Turkey, in 2013. Since then, 60 such vehicles have been delivered to Bursa.

Poland is not the only export market for Durmazlar. In 2019, Durmazlar won a tram order for 100 low-floor trams for Bucharest (Romania) in a consortium together with the Chinese CRRC and the Romanian Astra Vagoane Călători (Romania).

The tram in Olsztyn

The tram network in Olsztyn was opened at the end of 2015 and consists of a 7.5 km north-south tram line with two side branches with a length of 2 km and 1 km each. Three lines are currently operated by 15 three-car Solaris Tramino low-floor trams. The new, 6 km extension also runs in a north-south direction and connects the center with Pieczewo in the southeast of the city. The construction costs amount to 350 million złoty (approx. 82 million euros) and are 80% financed by the European Union.