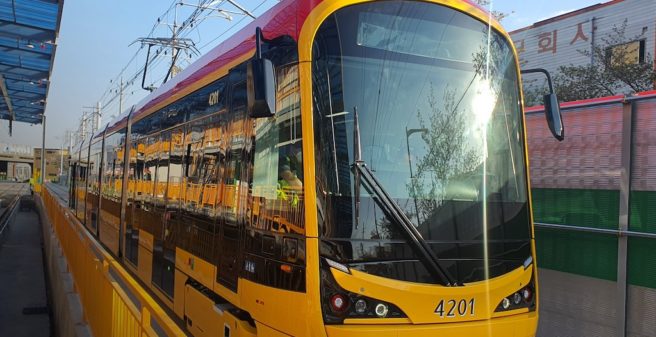 The first two vehicles are pre-series vehicles that were manufactured in (South) Korea. The static and dynamic commissioning, including initial tests, was also carried out there.

In June 2019, the TS ordered a total of 123 new low-floor trams from Hyundai Rotem, with an option for 90 more, after a lengthy tender process. We reported here:

The vehicles are five-part articulated wagons with two longer end wagons, each with an end bogie. In the middle, the two end car bodies are supported by shorter “articulated wagons” with fixed undercarriages. Between the two bogies is a sedan chair with a door. The exterior design of the new fleet was determined in a selection process in November 2019. The design that has now been implemented was ultimately selected. The colours correspond to the yellow-red house colours of Tramwaje Warszawskie. Translated with www.DeepL.com/Translator (free version)

The trams will be transported to Poland by sea and are expected in Warsaw in June. The TS reports that the new trams will be put into service in autumn. The remaining 121 trams will eventually be completed between the beginning of 2022 and the end of April 2023.

Today, the Warsaw tram fleet consists of almost 530 units, of which 311 (59%) are low-floor vehicles. The new Hyundai Rotem trams will thus gradually increase the share of low-floor trams and replace older 105Na Konstal trams in particular.