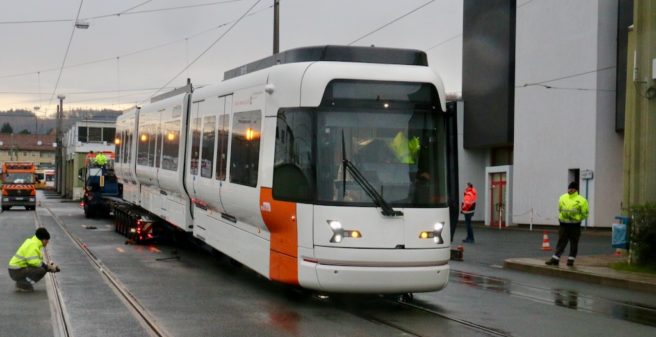 HeiterBlick delivered 16 Vamos-cars to moBiel in Bielefeld in 2011/12. At that time, these vehicles represented a significant further development of the existing vehicle fleet, especially due to their length of almost 35 meters and their greater width of 2.65 m. In December 2017 moBiel exercised an option for further 24 vehicles with the manufacturer consortium HeiterBlick / Kiepe-Electric. HeiterBlick from Leipzig produces the car bodies and bogies, while the Düsseldorf company Kiepe-Electric is responsible for the electrical equipment for the railways. The order is worth around EUR 95 million.

Late on Thursday evening (December 3rd) the first new Vamos from the second series, no. 5017, arrived in Bielefeld and was unloaded at the Sieker depot on the following day. The heavy transport, which was carried out by the Paderborn company Universal Transport, started on Wednesday evening in Leipzig and on Thursday shortly before Bielefeld it made a stopover at the Lipperland Nord motorway service station on the A2 before it covered the last kilometers to Bielefeld in the evening.

Even if more than 8 years have passed since the delivery of the first series, relatively little changes for the passenger with the new vehicles. The most noticeable change will be that 18 of the 24 vehicles will be delivered without folding steps. There are also changes to technical units, such as the auxiliary power converter and in the driver’s compartment.

The 24 new vehicles will be delivered every four weeks, so that they will be delivered in full by 2022. The vehicles replace the remaining 24 M8C from 1982–87. In addition to the Vamos the 36 M8D and the associated 5 MB4 remain in service.