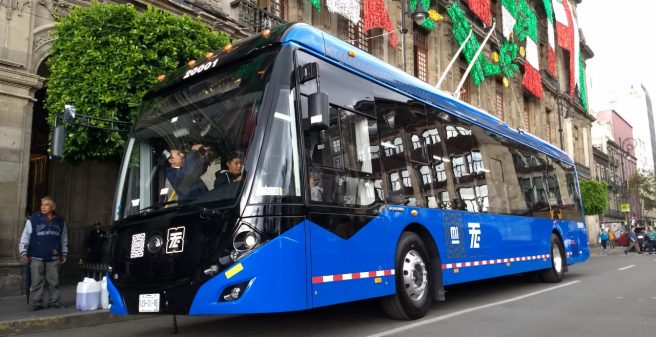 Just in time for this year’s Mexico’s national Independence Day on 15 September, the first of 63 new Yutong trolleybuses has been presented to the public on Mexico City’s central place, the so-called Zócalo in the historical city centre. The Yutong Series is the first new trolleybus procurement in 20 years. The operator STE ordered 30 vehicles in May 2019, and later increased the order to 40, then 63 vehicles.

Due to lacking investment during the past decades, the need for investment into the trolleybus infrastructure and vehicles. The network used to have a length of 492.61 km in 2007 with 18 lines. In 2014, there were only 8 lines with a length of 203.64 km. According to official numbers, the fleet consists in the following 339 vehicles of which only 135 vehicles are operation (equalling 40 %). Service quality of the trolleybus system is suffering from the aging fleet and reduced fleet size.

Therefore, it is very good news that the new trolleybus fleet is coming. Operation is expected to start on trolleybus line A in November 2019. Line A is one of the trunk lines of the trolleybus system, running north to south through the entire city.

The Yutongs have been built in China and are branded ZK5120C. New for Mexico City, the trolleybus is carrying a new blue livery. The total contract value is reported to be 290 million MEX (ca. 13.4 million EUR or ca. 334,000 EUR per trolleybus). The new trolleybuses have a length of 12 m a passenger capacity of 84 – 90 of which 56 – 62 standing and 28 seating. Maximum speed is 70 km/h. Additionally, the new vehicles are equipped with Lithium-Phosphate batteries, allowing for a catenary-free battery range of 70 km. According to media reports, the newly elected mayor of Mexico City, Claudia Sheinbaum, plans to purchase a total of 500 new trolleybuses. There are plans to reactivate old trolleybus lines and also build new lines.