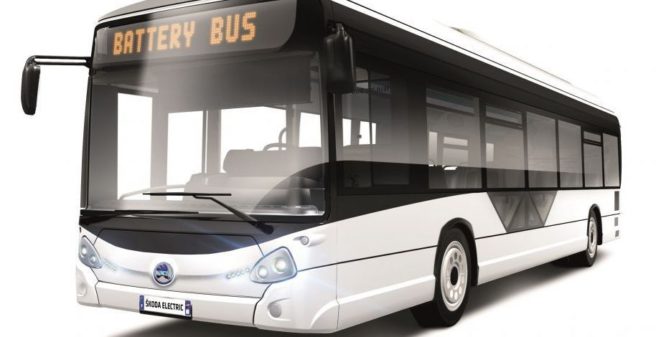 December 2019: The contract between Bonn’s SWB and Skoda Transportation for the delivery of 26 low-floor articulated trams for Bonn’s lines 61, 62 and 65 was signed in the conference room of the Stadtwerke Bonn headquarters. The new trams will replace the 24 low-floor trams built in 1994 (9451 to 9474).

During the meeting, two representatives of Skoda Transportation reported that the renowned Czech company plans to build not only trams but also buses in the future. This is remarkable insofar as Skoda had largely limited its product line to the construction of trolleybuses over the last decades. The most prominent example is probably the 9 Tr model, which was almost ubiquitous in Eastern Europe and was produced from 1962 to 1981. Since 2005, Skoda is no longer offering complete buses, but only electrical and other technical equipment for trolleybuses from other manufacturers, such as Iveco (Irisbus), Solaris and SOR.

Today Skoda Transportation belongs to the PPF Group, based in Amsterdam. The majority of the company’s shares is owned by the Czech industrialist Petr Kellner.

Towards the end of the millennium, the Turkish Sabanyi Group founded its bus manufacturer “Temsa” in the city of Adana (the letters “sa” at the end of the name were typical for a company, which belonged to the Sabanyi Group). Temsa was quite successful, especially in its home market, but it was also competitive enough to export to Germany, for example. Low-floor city buses of the type “Avenue” were used here. In Germany, however, Temsa was far more successful with its touring coaches, such as the Diamond or the MD 9 and above all the Safari.

It is worth emphasizing that today’s Skoda Transportation is not linked to the the Skoda car manufacturer, which is part of Volkswagen Group.

The transport operator of the Czech capital Prague DPHMP (Dopravni Podnik Hlavni Meste Prahy a. s.) had invited tenders for the delivery of 14 battery-electric city buses. The contract was awarded to Skoda Transportation for its new battery-electric “Skoda E City”. And – as expected – this bus is a “child” of the new cooperation with the group’s sister company Temsa. Of course, it will carry Skoda’s trademark at the front, but it is a close relative of Temsa’s “Avenue electron” electric city bus, on which it is based. Skoda says that the well-known Skoda brand symbol (the flying Indian arrow) symbolises technical progress, the depth of the manufacturing process, advanced production methods, high productivity as well as the ambition to sell its products worldwide. (Incidentally, the brand symbol is very old and goes back to the two founders of the company, Messrs Laurin and Klement).

The new Skoda battery buses will be three-door models with a length of 12,095 mm, a width of 2,550 mm and a height of 3,300 mm. They can carry up to 70 passengers. Their body shells will be built in Adana, Turkey, and the cars will then be completed in Plzen (Pilsen). Here, the electrical equipment, the information system and the batteries will be installed. In addition, the Plzen plant is responsible for the final completion of the car, the final tests and the final acceptance. The delivery also includes a possible option for technical support for the future development of new information systems and energy management functions (e.g. remote monitoring of consumption or checking battery status) or battery replacements during the projected lifetime of the buses. Furthermore, software and hardware for diagnosing vehicle faults and static chargers for night charging at the depot. Škoda will deliver a complete fleet of electric buses twelve months after signing the contract. This is the first order for electric buses where Škoda will cooperate with its Turkish affiliate Temsa.

The 14 “Skoda E City” are to be delivered within the next 12 months.

The batteries have a capacity of 260 to 290 kWh. The vehicles are designed for recharging on the line (“opportunity charging”); their range with one battery charge is guaranteed to be good for up to 100 kilometres. Recharging on the line is done via a roof-mounted pantograph. Recharging on the line is indispensable in light of the limited range with one battery charge. Recharging is planned both at the termini of the line and – and this is a new feature – by using the overhead lines of the trams or the trolley buses. In addition, charging can and will take place overnight at the depot via CCS combo plugs. The new buses also provide on-board chargers with a capacity of 600 or 750 volts DC.

The supply contract also includes the option that DPHMP can get direct support from Skoda if they want to further develop the information and energy management systems of their buses. Example for this are the monitoring as to how much electricity the buses use and how much electricity is still remaining in the batteries. It also includes the replacing of the accumulators with new ones during the planned service lifetime of the coaches. Finally, the scope of this option includes software and hardware for diagnosing any faults and stand chargers for overnight recharging at the depot.