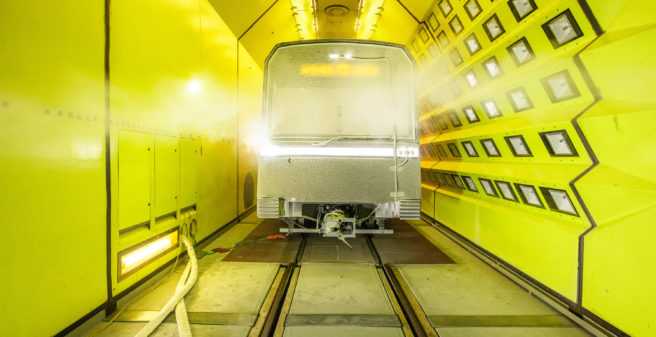 Update from 15 July 2020: The new X-car for the Vienna metro which we presented here yesterday, has performed numerous tests in the climate wind tunnel at Rail Tec Arsenal in Vienna Floridsdorf. The simulated extreme climatic conditions ranged from minus 25 degrees Celsius to plus 45 degrees Celsius. To simulate the driving speed, the wind speed in the wind tunnel was set to 80 km/h.

The X-car accomplished all tests

During the extensive tests, the interaction between the air conditioning and heating systems of the new metro train with different climatic conditions was tested, checked and documented. The newst train generation for Wiener Linien passed the endurance test without any issues. Here is a selection of pictures:

Presentation of the first X-car

The first brand-new X-type metro car has seen the light of day! Vienna’s transport operator Wiener Linien and Siemens Mobility presented the first train of the new metro generation at the Siemens Simmering plant on 2 July 2020. The train will go now into testing. Passenger operations on lines U1 to U4 are expected to begin in 2022.

Wiener Linien ordered a total of 34 fully automated metro trains at the end of 2017. The contract is worth EUR 550 million and also includes maintenance of the vehicles over 24 years as well as an option for eleven additional vehicles. From 2024, the X-cars will run fully automatically in GoA4 (Grade of Automation 4) mode on the new line U5. They can be operated semi-automatically or manually on the existing metro lines. Deliveries of all vehicles begin in mid-2020 and are expected to be completed by 2030.

The new trains are also equipped with a number of innovative solutions. For example, the driver’s cabins can be dismounted in order to convert the trains for future automatic operation. In fully automatic operation, this allows the floor space of the driver’s cab to be used later by the passengers and increases the passenger capacity of the trains. In addition, the innovative Passenger Information System Plus is used for the first time worldwide in the X-car: Information displays above each door offer passengers a position-dependent route guide to the coming station, including current connections, even before they arrive at the station. This means that passengers already know in front of the station in which direction they have to go after arriving. This leads to an optimization of both passenger flow and travel comfort.

The new X-trains will gradually replace the old so-called “silver arrows”, some of which have been in use since 1972. Today, there are still 135 U-type trains, built in 1972 – 1982 in service. The U-type was Vienna’s first metro generation.

Like the X-car predecessor, the so-called V-car, the new metro sets will also be fully accessible, barrier-free, air-conditioned and video-monitored. Since the end of June, all of the car for the first X train have been completely assembled. In the next few weeks, the six-car metro train will be delivered to the operator. Then the test and commissioning phase will start with an objective to start passenger service on lines U1 to U4 in 2022. With the construction of the new line U5 from Frankhplatz to Karlsplatz, the X-Wagen will run on Vienna’s first fully automated subway line from 2025 at the earliest. To do this, the existing stations from Karlsplatz to Rathaus have to be converted and equipped with platform screen doors, the U5 station Frankhplatz is being rebuilt.