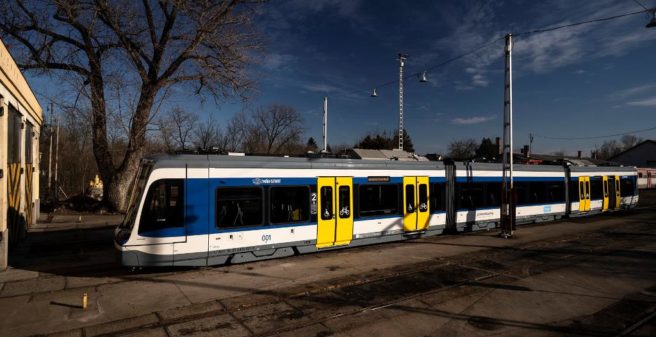 Stadler transported the first Citylink tram-train from Valencia to Szentes, Hungary, where it occupied its temporary home in the maintenance depot of Hungarian Railway Company MÁV. The three-car, 70 tons prototype was carried by special oversized shipment from Valencia to Szentes in 9 days. The first unit will be followed by altogether 7 trains, and the batch of 8 units are expected to start commercial service between Szeged and Hódmezővásárhely (south Hungary) in the last quarter of 2021.

Hungarian passenger operator MÁV-START Zrt. signed the contract with Stadler for the supply of 8 bi-mode tram-train vehicles with an option for additional 4 units in May 2017. The new vehicles, which will connect without transhipments the tram networks of Szeged and Hódmezövásárhely, are going to be the first tramtrains in Hungary. The objective of the project is to provide a high quality public transportation system for passengers commuting every day between the two cities. The first batch consists of altogether 8 units, which will be followed by a second lot of additional 4 trains, which the customer MÁV-START ordered last year as an option to the base contract.

The bidirectional and bi-mode Citylink vehicles are able to operate in electric mode under 600 V DC overhead on the tram networks in Szeged and Hódmezövásárhely 25 km northeast of Szeged, and in diesel mode on the mainline connecting both cities at a top speed of 100 km/h.

Szeged’s urban tram network has a length of ca 23 km and is currently operated by four lines. The new tram train service will be the first of its’ kind in Hungary.

The new tram-trains have a capacity to carry 216 passengers, out of which 92 can be seated. The universal and accessible vehicles have been designed according to the latest safety standards. The vehicles are low-floor throughout and barrier-free. Spacious interior with a high number of seats and four multi-purpose places for persons of limited mobility such as wheelchair users and parents with prams, full HVAC, CCTV and PIS systems are all features that will optimize the passenger travel experience.

According to local media reports further tram train system are planned in the region, especially if the project in Szeged proves successful. These include routes in the Budapest area, between the Romanian cities of Oradea and Debrecen, in the Szombathely region in western Hungary and in Miskolc. Another option is the continuation of the dual-system operation to Subotica across the Serbian border, 43.5 km southwest of Szeged.

Stadler has had some experience in the tram-train market. The bi-mode tram trains for Szeged belongs to the multicountry platform, which has been sold continuously since 2006. It’s a modular and versatile light rail vehicle family customizable to fit almost any network requirements and mobility demands. In addition to the order in Hungary, Citylink LRV are running in Karlsruhe and Chemnitz (Germany), Alicante (Spain), Puebla (Mexico) and Sheffield in the UK where, by 2022, these vehicles are also expected to arrive in the Wales Region. Considering the technical characteristics of the vehicle, special care has been taken to maximize acoustic insulation, providing a smooth and silent operation. The total number of sold units is 165, out of which 111 are already in commercial operation.